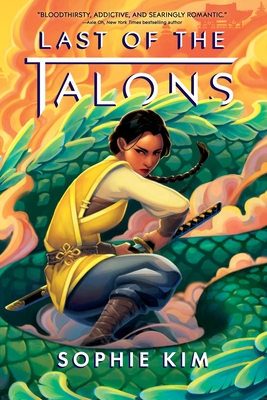 Last of the Talons

“Last of the Talons is a stunning blend of dark romance and Korean mythology. Sophie Kim writes enemies to lovers with heart-pounding intensity, blurring the line between love and hate. Bloodthirsty, addictive, and searingly romantic.” —Axie Oh, New York Times bestselling author of The Girl Who Fell Beneath the Sea

After the destruction of her entire Talon gang, eighteen-year-old Shin Lina—the Reaper of Sunpo—is forced to become a living, breathing weapon for the kingdom’s most-feared crime lord. All that keeps her from turning on her ruthless master is the life of her beloved little sister hanging in the balance. But the order to steal a priceless tapestry from a Dokkaebi temple incites not only the wrath of a legendary immortal, but the beginning of an unwinnable game…

Suddenly Lina finds herself in the dreamlike realm of the Dokkaebi, her fate in the hands of its cruel and captivating emperor. But she can win her life—if she kills him first.

Now a terrible game of life and death has begun, and even Lina's swift, precise blade is no match for the magnetic Haneul Rui. Lina will have to use every weapon in her arsenal if she wants to outplay this cunning king and save her sister...all before the final grain of sand leaks out of the hourglass.

Because one way or another, she'll take Rui's heart.

Even if it means giving up her own.

Sophie Kim spends her days both studying at her university and writing her novels, which are strongly influenced by her firm belief that diversity and non-stereotypical representation in literature are vastly important. Blessed (or cursed) with a voracious appetite for all things bookish, Sophie can often be found wandering the aisles of a library or curled up with a precariously balancing stack of stories. Last of the Talons is her first novel. sophiekimwrites.com
Loading...
or support indie stores by buying on