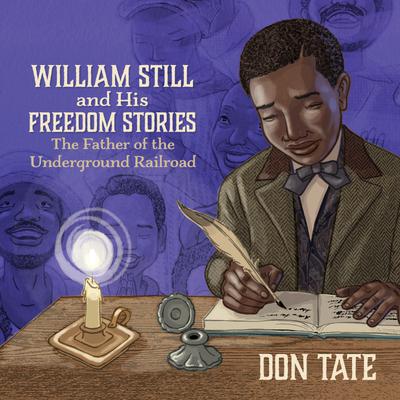 The Father of the Underground Railroad

William Still’s parents escaped slavery but had to leave two of their children behind, a tragedy that haunted the family. As a young man, William went to work for the Pennsylvania Anti-Slavery Society, where he raised money, planned rescues, and helped freedom seekers who had traveled north. And then one day, a strangely familiar man came into William’s office, searching for information about his long-lost family. Could it be? Motivated by his own family’s experience, William began collecting the stories of thousands of other freedom seekers. As a result, he was able to reunite other families and build a remarkable source of information, including encounters with Harriet Tubman, Henry “Box” Brown, and William and Ellen Craft. Award-winning author-illustrator Don Tate brings to life the incredible, stranger-than-fiction true story of William Still, a man who dedicated his life to recording the stories of enslaved people fleeing to freedom.

Don Tate is the award-winning illustrator of numerous books for children, including Duke Ellington's Nutcracker Suite, Ron's Big Mission, and Black All Around. He is the author of It Jes' Happened: When Bill Traylor Started to Draw. Don lives with his wife and son in Austin, Texas.
Loading...