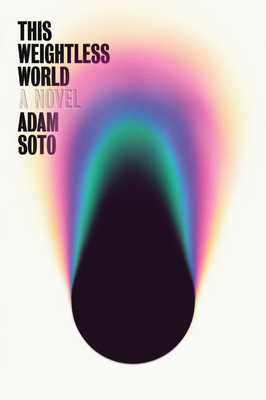 "It's precisely Soto's refusal to be 'weighted' down by decades of genre tradition, to instead turn the trope on its head and in doing so remind us that no-one but ourselves is coming to save us, that makes This Weightless World such an exciting and radical novel." —Ian Monde, Locus

"Set in Silicon Valley and Chicago, This Weightless World considers questions of morality in a world where people feel powerless in the face of formidable systemic forces." —Laura Adamczyk, A.V. Club

A literary debut subverting classic sci-fi tropes set in gentrified Chicago, Silicon Valley, and across the vastness of the cosmos.

From the streets of gentrified Chicago, to the tech boom corridors of Silicon Valley, This Weightless World follows a revolving cast of characters after alien contact upends their lives.

We are introduced to Sevi, a burned-out music teacher desperate for connection; Ramona, his on-again, off-again computer programmer girlfriend; and Sevi’s cello protégé Eason, struggling with the closure of his high school; after a mysterious signal arrives from outer space. When the signal—at first seen as a sign of hope—stops as abruptly as it started, they are all forced to reckon with its aftermath. In San Francisco, Sevi fights to find meaning in rekindled love; and Ramona–determined to build an AI to prevent mankind’s self-destruction–begins to feel the weight of past mistakes. And in Chicago, Eason measures his commitment to an estranged childhood friend against the chance of escaping neighborhood troubles.

A dazzling deconstruction of science fiction tropes, This Weightless World looks to the past for a vision of the future.

Praise For This Weightless World: A Novel…

"Soto brilliantly inverts the inherently outward aspect of the first-contact trope—the idea of seeking salvation in the stars—by forcing his characters to look inward, to question their acquiescence on issues like climate change, police brutality, and the smothering influence of Big-Tech . . . It's precisely Soto's refusal to be 'weighted' down by decades of genre tradition, to instead turn the trope on its head and in doing so remind us that no-one but ourselves is coming to save us, that makes This Weightless World such an exciting and radical novel."
—Ian Monde, Locus

"Set in Silicon Valley and Chicago, This Weightless World considers questions of morality in a world where people feel powerless in the face of formidable systemic forces."
—Laura Adamczyk, A.V. Club

"Though the novel gestures toward wider global reactions, Soto wisely focuses on a few specific humans . . . Soto’s characters are finely drawn, as are their philosophically thorny conflicts with each other . . . Amid the discovery of alien life, a touching meditation on humanity."
—Kirkus Reviews

"What of our current moment is ephemeral, and what is part of some unstoppable machine? By starting with one of the big 'what ifs'—extraterrestrial contact—Adam Soto charts his own course in looking for the answer. At once utterly ambitious, moving, and intimate, This Weightless World stretches from domestic protests to centuries-distant planets, all while exploring the delicate hopes of its characters. I couldn't stop reading. The ending was unforgettable. I can't believe Soto pulled it off!"
—Kawai Strong Washburn, author of the PEN/Hemingway Award-winning Sharks in the Time of Saviors

"This Weightless World is pure polyphony. Adam Soto sets programmers alongside revolutionaries, the contours of love alongside the coruscations of code, the power of classical music alongside the beauty of video games, and he does it all with total authority. Here it is: the social novel for the 21st century."
—Robin Sloan, author of Sourdough

"This Weightless World filters its alien encounters and deep-space expeditions, its dreams and anxieties about the centuries to come, through the beating hearts of a few struggling, yearning, fumbling, desperate, modern-day human beings. It's not so much a novel of ideas, asking, 'What does the future hold for us?,' as a novel populated by characters who can't stop asking themselves that same question. Reading it, I was reminded that caring about the fate of the planet is really a matter of caring about the fates of its billions of distinct and individual inhabitants, with their billions of distinct and individual futures."
—Kevin Brockmeier, author of A Brief History of the Dead

"With This Weightless World—and its use of a classic alien contact story to reveal America’s constant struggle with race, class, inequality and mistrust— Adam Soto proves that he gets what science fiction is really about: it’s always the present rather than the far future, and the right here rather than the far away. A fascinating debut."
—Tim Maughan, author of Infinite Detail, a Locus Award finalist

Adam Soto is a co-web editor at American Short Fiction. He holds an MFA from the Iowa Writers' Workshop and is a former Michener-Copernicus Foundation Fellow. He lives with his wife in Austin, Texas, where he is a teacher and a musician. This Weightless World is his first novel.
Loading...
or support indie stores by buying on