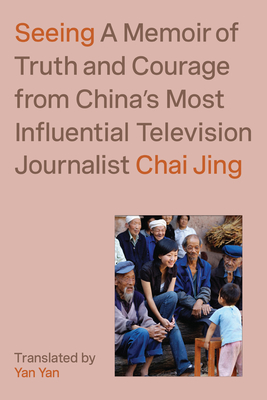 In the tradition of Katy Tur, Jane Pauley, and Peter Jennings, Chai Jing shows us the power of television news and the complex challenges of reporting in China.

After garnering an intimate cult following as a late-night college radio DJ, Chai Jing is thrust into the spotlight when she is offered a position as a news anchor at CCTV, China's official state news channel. She struggles to find her footing while discovering corruption, courage, and hope within the people she meets.

Through an immediate and deeply personal narrative, Chai tells the stories of SARS quarantine wards, a teenage suicide cult, domestic violence, the consequences of industrial pollution, and workplace sexism, while examining her growth as a journalist. At times doubting her abilities and fighting through the challenges of a male-dominated workplace, Chai Jing returns time and again to the extraordinary stories of her interviewees, committed to sharing their voices.

This candid memoir about overcoming government obstacles and finding success provides a rare window into how China has faced challenges like pollution, climate change, and unfair standards for women in the public eye.

Born in 1976, Chai Jing is an award-winning reporter and television host in China. While working at CCTV from 2001, she gained recognition covering the SARS epidemic in 2003. She has reported on domestic violence in China, contributing to the anti-domestic violence law in 2005, the same year LGBT+ people appeared in an interview, titled "In the Name of Life." In 2007, she won the National Green People Award for her coverage of pollution in her hometown. Seeing has sold over 5 million copies since its Chinese publication in 2012. In 2015, she was named one of Time magazine's 100 most influential people, and one of the top 100 global thinkers by Foreign Policy.
Loading...
or
Not Currently Available for Direct Purchase