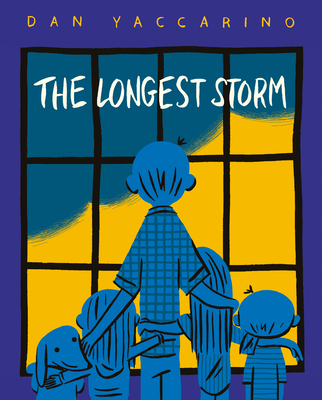 “The Longest Storm” feels like a validation—a blessing, even.” — Wall Street Journal

This heartwarming family story from acclaimed author-illustrator Dan Yaccarino features a father and his kids who are stuck inside the house together — and figure out how to connect and overcome conflict. A New York Public Library 2021 Best Books for Kids selection.

No one knew where the strange storm came from, or why it lasted so long. The family at the center of this timely story has to hunker down together, with no going outside - and that's hard when there's absolutely nothing to do, and everyone's getting on everyone else's nerves.

This classic in the making will lift hearts with its optimistic vision of a family figuring out how to love and support one another, even when it seems impossible.

Praise For The Longest Storm…

A 2022 Bank Street Best Children's Book of the Year

★“At once timely and timeless…. This book will stay with readers long after the last page is turned.” — School Library Journal, STARRED

★"Emotionally nuanced, authentic .... clearly shows how connection and resilience can prevail in the face of any storm.” — Publishers Weekly, STARRED

★"Feels emotionally true to the process of going through any profound crisis….Resonant and reassuring.” — Kirkus Reviews, STARRED

"In the aftermath of a strange time, “The Longest Storm” feels like a validation—a blessing, even.” —Wall Street Journal

“A deceptively simple story with real emotional and visual depth, concluding with an acknowledgment that happy endings often leave work yet to be done. That, too, hits home.” — New York Times Book Review

One of “The Best Children’s Books of 2021 —Tinybeans

Best of 2021: Our Favorite Picture Books and A Best Picture Book of 2021 for Starting Conversations — Kirkus Reviews

“Masterful….encompasses so many themes and is so well-written that sharing it with readers is highly recommended. A story to ponder and illustrations to consider again and again… thoroughly satisfying ... on all levels.” — School Library Connections

"A profound, optimistic story of dealing with hardship....simultaneously paints a picture of suffering, family conflict, and the power of apology....a must-read."  — Books to Borrow, Books to Buy, syndicated column

“Perfectly reflects … our emotions and feelings ….Readers are offered a hopeful and much. Needed reminder that one day the storm will indeed end but we have each other — in good times and bad — until it does." — The Book Wrangler

"The Longest Storm will pull at your heart, but remind you of how far we’ve come….this book is a metaphor for any time we are having a hard time finding a balance….For any house, school or library that wants a gentle way to discuss how being together for an unforeseen amount of time can be hard, but in this book, like any storm, will be light at the end." - Storymamas

"I love the underlying themes of grief and trauma, loneliness, and the healing power of apology. There is just no other book like this out there." —Bilingual Mingle

Children the world over know Dan Yaccarino from his children's books, Parent's Choice Award-winning animated TV series "Oswald" (Nick Jr), Emmy-winning "Willa's Wild Life" (NBC and Qubo), and character designs for "The Backyardigans" (Nickelodeon), as well as his many illustrated toys, games, and other children's products. In addition to his own stories, Dan's bold, stylized illustrations add wit and energy to the work of such distinguished authors as Margaret Wise Brown, Jack Prelutsky, and Kevin Henkes. Dan's internationally recognized art style has earned him a large following in Japan, exhibits in New York, Los Angeles, Tokyo, and Bologna, and a visit to the White House. He is also a contributing children's book reviewer for the New York Times.
Dan's books have been translated into many languages and have inspired animated series, toys, ebooks, children's musicals, and video adaptations. People all over the world enjoy Oswald, Dan's animated series about the wonderfully whimsical world of a lovable octopus, which Time magazine chose as one of the top 6 shows to watch on cable.Animation Magazine hails him as "an American original." Dan's work has been recognized with a host of prestigious awards including the Bologna Ragazzi, The New York Times 10 Best Illustrated, ALA Notable, and the Parents Choice Award. Over 2.5 million of his books have been sold to date.
Loading...
or support indie stores by buying on