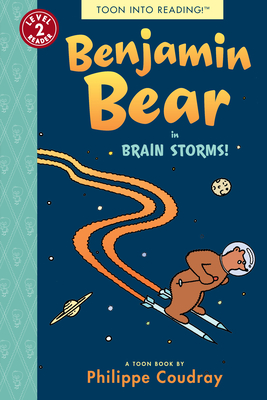 "A visually formatted joke book to inspire thinking as well as laughs."—Kirkus Reviews

"A marvel of economy in setup, delivery, and payoff."—Booklist, starred review

Benjamin Bear can always surprise his friends, whether it's by walking on his hands during a snowstorm or by using a tree as a parachute. This unassuming bear may at first seem down-to-earth, but his ideas are always out of this world. His zany approach to life has earned him two Eisner Award nominations and bestseller status among kids everywhere. In the third book about Benjamin's adventures, author Philippe Coudray continues to delight readers by bending the rules of common sense and breaking the laws of physics. Pull up a chair, grab a friend, and open your mind—today's forecast is for BRAIN STORMS!

Philippe Coudray loves drawing comics, and his many children's books are often used in the schools of his home country of France. His work was chosen by students to win the prestigious Angoulême Prix des Écoles. His first two books in English, Benjamin Bear in Fuzzy Thinking and Benjamin Bear in Bright Ideas, were both nominated for the Eisner for Best Publication for Early Readers.

Philippe Coudray: Philippe Coudray loves drawing comics, and his many children's books are often used in the schools of France, his home country. His work was chosen by students to win the prestigious Angoulême Prix des Écoles.

Françoise Mouly: Françoise Mouly is the publisher and Editorial Director of TOON Books, which she launched in 2008. She joined The New Yorker as art editor in 1993. Ms. Mouly has been responsible for over 1,000 covers over her tenure at The New Yorker.
Loading...
or support indie stores by buying on