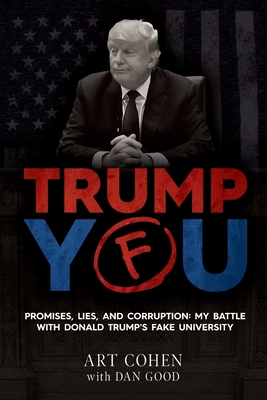 Trump University was the most expensive legal defeat of Donald Trump's career-but even though he settled for $25 million, he still got off too easy. Years before his White House run, the reality TV star and real estate scion launched a for-profit education initiative-Trump University, or TrumpU for short - in which he promised to share his real estate secrets at seminars held in hotel ballrooms. As it turned out, Trump University wasn't an actual university and didn't feature Trump's secrets. The scam suckered thousands of unsuspecting victims out of their hard-earned money. And it fueled a tense legal battle that should have derailed Trump's presidential run in 2016. TRUMP YOU: Promises, Lies, And Corruption: My Battle With Donald Trump's Fake University recounts the inside story of the TrumpU legal saga through the eyes of Art Cohen, a student victim who personally sued Donald Trump in federal court in 2013 and had a private view of Trump during the height of his presidential campaign. While TrumpU seems quaint today, it foreshadowed the devastation, bloodshed, and corruption that defined Trump's presidency.