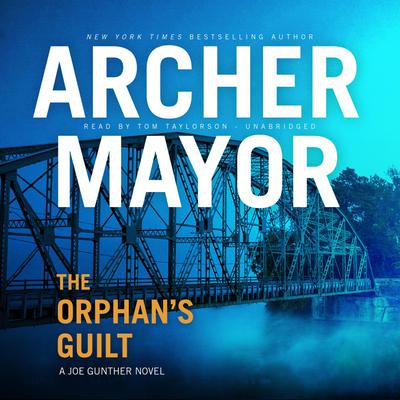 In Archer Mayor’s intriguing new Vermont-based mystery, The Orphan’s Guilt, a straightforward traffic stop snowballs into a homicide investigation after Joe Gunther and his fellow investigators peel back layer upon layer of history and personal heartbreak to learn a decades-old hidden truth.

John Rust is arrested for drunk driving by a Vermont state trooper. Looking to find mitigating circumstances, John’s lawyer hires private eye Sally Kravitz to look into the recent death of John’s younger brother, purportedly from a childhood brain injury years earlier. But what was the nature of that injury, and might its mechanism point more to murder than to natural causes? That debate brings in Joe Gunther and his team.

Gunther’s efforts quickly uncover an ancient tale of avarice, betrayal, and vengeance that swirled around the Rust boys growing up. Their parents and the people they consorted with―forgotten, relentless, but now jolted to action by this simple set of circumstances―emerge with a destructive passion. All while the presumably innocent John Rust mysteriously vanishes with no explanation.

Archer Mayor is the New York Times bestselling author of the highly acclaimed Vermont-based series of mystery novels featuring detective Joe Gunther. He is a past winner of the New England Book Award for his body of work, the first time a writer of crime literature has been so honored. He also works as a death investigator, a sheriff’s deputy, and a volunteer firefighter and EMT in Vermont.