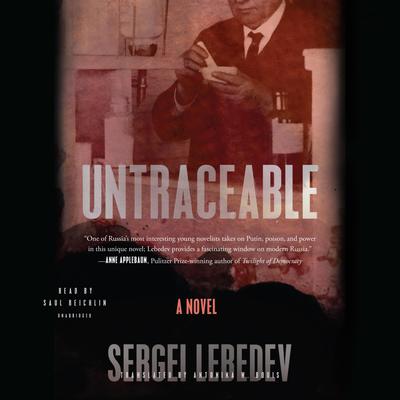 The terrifying, lengthening list of Russia’s use of lethal poisons against its critics has inspired acclaimed author Sergei Lebedev’s latest novel. With uncanny timing, he examines how and why Russia and the Soviet Union have developed horrendous neurotoxins.

At its center is a ruthless chemist named Professor Kalitin, obsessed with developing an absolutely deadly, undetectable, and untraceable poison for which there is no antidote. But Kalitin becomes consumed by guilt over countless deaths from his Faustian pact to create the ultimate venom. When the Soviet Union collapses, the chemist defects and is given a new identity in Western Europe.

After another Russian is murdered with Kalitin’s poison, his cover is blown, and he is drawn into an investigation of the death by Western agents. Two special-forces killers are sent to silence him―using his own undetectable poison.

In this fast-paced, genre-bending tale, Lebedev weaves suspenseful, stunningly beautiful prose exploring the historical trajectories of evil. From Nazi labs, Stalinist plots, and the Chechen Wars to present-day Russia, Lebedev probes the ethical responsibilities of scientists supplying modern tyrants and autocrats with ever newer instruments of retribution, destruction, and control.

Sergei Lebedev has been called the most important younger Russian author writing today. His novels have been translated into many languages and three of his works—Oblivion, The Year of the Comet, and The Goose Fritz—have been published in English to great acclaim by New Vessel Press.