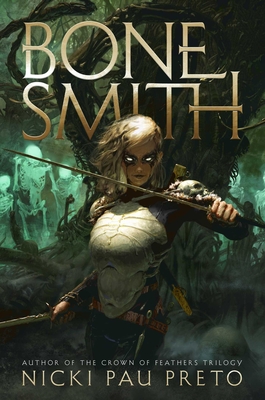 Bonesmith (House of the Dead Duology)

Gideon the Ninth meets the Game of Thrones White Walkers in this dark young adult fantasy about a disgraced ghost-fighting warrior who must journey into a haunted wasteland to rescue a kidnapped prince.

Ready your blade. Defeat the undead.

In the Dominions, the dead linger, violent and unpredictable, unless a bonesmith severs the ghost from its earthly remains. For bonesmith Wren, becoming a valkyr—a ghost-fighting warrior—is a chance to solidify her place in the noble House of Bone and impress her frequently absent father. But when sabotage causes Wren to fail her qualifying trial, she is banished to the Border Wall, the last line of defense against a wasteland called the Breach where the vicious dead roam unchecked.

Determined to reclaim her family’s respect, Wren gets her chance when a House of Gold prince is kidnapped and taken beyond the Wall. To prove she has what it takes to be a valkyr, Wren vows to cross the Breach and rescue the prince. But to do so, she’s forced into an uneasy alliance with one of the kidnappers—a fierce ironsmith called Julian from the exiled House of Iron, the very people who caused the Breach in the first place…and the House of Bone’s sworn enemy.

As they travel, Wren and Julian spend as much time fighting each other as they do the undead, but when they discover there’s more behind the kidnapping than either of them knew, they’ll need to work together to combat the real danger: a dark alliance that is brewing between the living and the undead.