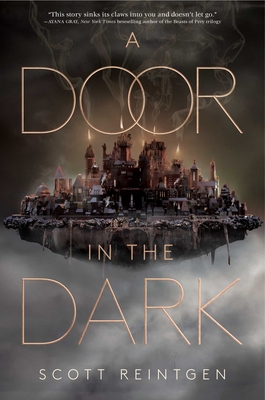 A Door in the Dark

One of Us is Lying meets A Deadly Education in this fantasy thriller that follows six teenage wizards as they fight to make it home alive after a malfunctioning spell leaves them stranded in the wilderness.

Ren Monroe has spent four years proving she’s one of the best wizards in her generation. But top marks at Balmerick University will mean nothing if she fails to get recruited into one of the major houses. Enter Theo Brood. If being rich were a sin, he’d already be halfway to hell. After a failed and disastrous party trick, fate has the two of them crossing paths at the public waxway portal the day before holidays—Theo’s punishment is to travel home with the scholarship kids. Which doesn’t sit well with any of them.

A fight breaks out. In the chaos, the portal spell malfunctions. All six students are snatched from the safety of the school’s campus and set down in the middle of nowhere. And one of them is dead on arrival.

If anyone can get them through the punishing wilderness with limited magical reserves it’s Ren. She’s been in survival mode her entire life. But no magic could prepare her for the tangled secrets the rest of the group is harboring, or for what’s following them through the dark woods…

Scott Reintgen is a former public school teacher and still spends summers teaching middle schoolers dark fiction and fantasy at Duke Young Writers’ Camp. The birth of his children has convinced him that magic is actually real. He lives in North Carolina, surviving mostly on cookie dough and the love of his wife, Katie. Scott is the author of the Nyxia Triad and Ashlords series and A Door in the Dark for young adults, as well as the Talespinners series and The Problem with Prophecies for middle graders. You can follow him on Facebook, Instagram, and Twitter at @Scott_Thought.
Loading...
or support indie stores by buying on