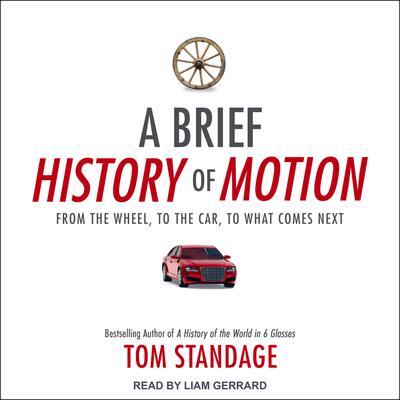 From the Wheel, to the Car, to What Comes Next

Tom Standage's fleet-footed and surprising global histories have delighted fans and sold hundreds of thousands of copies. Now, he returns with a provocative account of an overlooked form of technology-personal transportation-and explores how it has shaped societies and cultures over millennia.

Beginning around 3,500 BCE with the wheel—a device that didn't catch on until a couple thousand years after its invention—Standage zips through the eras of horsepower, trains, and bicycles, revealing how each successive mode of transit embedded itself in the world we live in, from the geography of our cities to our experience of time to our notions of gender. Standage explores the social resistance to cars and the upheaval that their widespread adoption required. Cars changed how the world was administered, laid out, and policed, how it looked, sounded, and smelled—and not always in the ways we might have preferred.

Today—after the explosive growth of ride-sharing and years of breathless predictions about autonomous vehicles—the social transformations spurred by coronavirus and overshadowed by climate change create a unique opportunity to critically reexamine our relationship to the car. With A Brief History of Motion, Standage overturns myths and invites us to look at our past with fresh eyes so we can create the future we want to see.

Liam Gerrard is an award-winning voice artist with over ten years of experience working in every field of the voice industry, as well as a highly acclaimed stage and screen actor. His animation Walter Tull-Britain's First Black Officer was nominated for a BAFTA in 2016, and he has been nominated for an Audie Award in 2017. He has narrated over thirty audiobooks in a wide range of genres and styles.

He comes from a large Irish family, although he was raised in Yorkshire before moving to the Middle East, where he went to school. He studied at Lancaster University and then as a classically trained actor at Mountview; he is currently the youngest actor to play the lead role of Prospero in Shakespeare's The Tempest in London's West End. He has worked for the most renowned theater companies, including the Royal Exchange Theatre (two Manchester theater award nominations), Edinburgh Lyceum Theatre (five Critics Choice nominations), Soho Theatre (MTN nomination), and most regional theaters throughout the U.K., including Alan Aykbourn's SJT, New Vic, Oldham Coliseum, Nottingham Playhouse, and Theatre by the Lake. His wide-ranging experience has also seen him perform Opera in Rigoletto.

In his spare time Liam is also a musician who plays the violin, drums, piano, and percussion. He also enjoys spending time with Peg, his Springer Spaniel, out on the Peak District whenever he can get away from the studio!