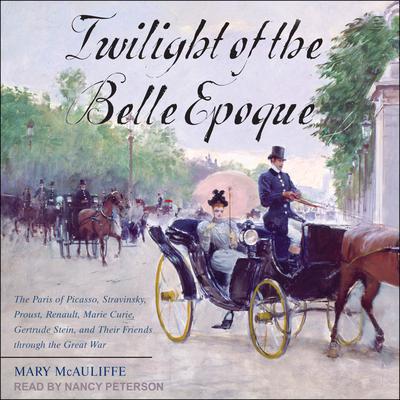 The Paris of Picasso, Stravinsky, Proust, Renault, Marie Curie, Gertrude Stein, and Their Friends through the Great War

Mary McAuliffe's Dawn of the Belle Epoque took the reader from the multiple disasters of 1870–1871 through the extraordinary re-emergence of Paris as the cultural center of the Western world. Now, in Twilight of the Belle Epoque, McAuliffe portrays Paris in full flower at the turn of the twentieth century, where creative dynamos such as Picasso, Matisse, Stravinsky, Debussy, Ravel, Proust, Marie Curie, Gertrude Stein, Jean Cocteau, and Isadora Duncan set their respective circles on fire with a barrage of revolutionary visions and discoveries. Such dramatic breakthroughs were not limited to the arts or sciences, as innovators and entrepreneurs such as Louis Renault, André Citroën, Paul Poiret, François Coty, and so many others—including those magnificent men and women in their flying machines—emphatically demonstrated. But all was not well in this world, remembered in hindsight as a golden age, and wrenching struggles between Church and state as well as between haves and have-nots shadowed these years, underscored by the ever-more-ominous drumbeat of the approaching Great War—a cataclysm that would test the mettle of the City of Light, even as it brutally brought the Belle Epoque to its close.

Nancy Peterson, winner of the prestigious Audio Publishers Association Audie Award, is a veteran actor and voice-over artist. Nancy has a penchant for dialects, diving deep into the study of language. Her narration style, summed up by AudioFile magazine, "creates the sense of listening to a play instead of a straightforward reading." She began her narrating career with petty theft. As a precocious eleven-year-old, the allure of her dad's brand-new cassette recorder she was strictly forbidden to touch, was too tempting to bear. With an Encyclopedia Brown paperback and the recorder, she began a journey she continues to love.