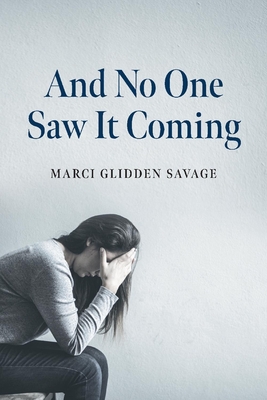 And No One Saw It Coming

August 13, 2014, Marci found Paul, her beloved husband of thirty-four years, dead by suicide on their backyard patio. No warning. No explanation. No final good-bye. Less than five years later, on March 15, 2019, the unthinkable and unimaginable happened. Michael, Marci's second husband of only eight months, was found dead by suicide. In this captivating book, Marci vulnerably shares her intimate journey from anger, hopelessness, and sorrow to acceptance and joy while offering hope to others facing similar situations today.

Suicide is considered one of the most challenging types of loss to sustain. Your grief is complicated, messy, and haunting. In 2019, suicide was the tenth leading cause of death in the United States - an alarming fact and dangerous epidemic. With dogged determination, Marci uses her grief and sets out to expose the ill-conceived and biased attitudes toward mental illnesses standing in the way and keeping many individuals battling depression and anxiety from seeking help, particularly men.

In the grip of unrelenting pain, Marci courageously meets grief head-on. With grit and candid openness, she opens the door into her personal story of lost love, betrayal, abandonment, shattered dreams, unanswered questions, judgements, and harmful social stigma. Vividly, Marci reveals the catastrophic impact of a suicide death on loved ones left behind. From the first page, her riveting, original, and profoundly moving open letter to mental illness exposes the insidious way it torments and holds captive its victims under the guise of silence. And why no one could see the end coming. Twice.

Marci Glidden Savage is the CEO of a family-owned packaging supply company. After experiencing the catastrophic impact of suicide twice, Marci emerges as a fierce proponent for eliminating the "social stigma" attached to mental illness which keeps many individuals battling depression and anxiety from seeking help. Marci lives in Southern California where she enjoys spending time with family and friends, traveling and endless hours of genealogy research.
Loading...
or support indie stores by buying on
(This book is on backorder)