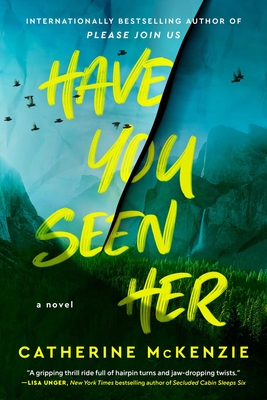 Have You Seen Her

A thrilling and timely novel about three women with dark secrets whose lives intersect in the picturesque and perilous Yosemite National Park from the USA TODAY bestselling author of the “propulsive” (Laura Dave, author of The Last Thing He Told Me) Please Join Us.

Equipped with a burner phone and a new job, Cassie Peters has left her hectic and secretive life in New York City for the refuge of her hometown of Mammoth Lakes, California. There, she begins working again with Yosemite Search and Rescue, where a case she worked a decade ago continues to haunt her.

She quickly falls into old patterns, joining a group of fellow seasonal workers and young adventurers who have made Yosemite their home during the summer. There, she meets Petal, a young woman living in a trailer with her much older wife, keeping a detailed diary of the goings on of the park, and Jada, a recent college graduate on a cross-country road trip with her boyfriend, documenting their journey on Instagram.

When these three women cross paths, Cassie’s past catches up with her, and the shocking consequences ripple out far beyond what any could have imagined in this unputdownable thriller from an author who “never fails to impress” (Mary Kubica, New York Times bestselling author).

Praise For Have You Seen Her: A Novel…

"When Cassie Peters returns to her life as a search and rescue worker, a man winds up dead. Who is he? And what was she running from? A full cast of characters explored through shifting timelines make Have You Seen Her a fabulous adventure. The writing is superb and the twist a brilliant surprise! Another killer read by Catherine McKenzie." —Wendy Walker, international bestselling author of Don’t Look For Me and What Remains

“With a compelling cast and a story choc-a-block full of twists, MacKenzie drops you into the beating heart and ticking clock of a Search & Rescue outfit in Yosemite California. A uniquely fascinating setting that befits this thrilling, propulsive read!”
—Daniel Kalla, best selling author of Fit to Die and Lost Immunity

"Set in breathtaking Yosemite park, Catherine McKenzie's Have You Seen Her follows a capable but haunted woman on the run who must confront her past in order to move into the future. Taut and atmospheric with as many jagged peaks and valleys as its dramatic setting, this captivating page-turner will keep you guessing until the end.”
—Katherine St. John, author of The Vicious Circle

“I love that each book Catherine McKenzie writes is completely unique. HAVE YOU SEEN HER is no exception. McKenzie immediately hooks us with a wonderfully flawed, layered protagonist trying to unravel her past by returning to the scene of one of her greatest traumas. With the incredibly vivid setting of Yosemite National Park, captivating characters, and superbly executed twists, this thriller is mesmerizing from beginning to end. I absolutely devoured it!" —Samantha M. Bailey, author of Woman on the Edge and Watch Out for Her

“I am fully obsessed with Have You Seen Her. From the stunning setting to the vibrant, complicated characters, from the pitch-perfect pacing to the stellar twist, Catherine McKenzie’s latest had me from page one. Clear your schedule and prepare to be thrilled!” —Kathleen Barber, author of Truth Be Told and Follow Me

"Sleeping with the Enemy meets Free Solo in the latest hypnotically immersive thriller by Catherine McKenzie. In the tradition of Gillian Flynn, with nods to our current true crime obsession, Have You Seen Her is a stunner. I couldn’t read it fast enough." —Mindy Mejia, international bestselling author of Everything You Want Me To Be and Strike Me Down

“Danger lurks within the gorgeous setting of this addictive thriller. With a premise that feels ripped from the headlines, Have You Seen Her will appeal to fans of true crime, but it’s the layers of mystery—from the protagonist’s dark past to the novel’s roster of missing persons—that make it especially difficult to put this one down.”  —Megan Collins, author of The Family Plot

“Have You Seen Her is a delicious mix of the physical dangers of the Yosemite wilderness and the secret lives of the humans who visit. McKenzie’s latest illuminates that we are, none of us, who we seem, nor can anyone predict what we’re capable of when pushed to the limit. A smart, twisty thriller that will have readers glued to the page until the final, explosive chapter, Have You Seen Her? belongs at the top of your reading list.” —Danielle Girard, USA Today Bestselling Author of Up Close

“The dangers Cassie Peters encounters while working search and rescue in Yosemite National Park can’t compete with those she left behind. Have You Seen Her is a story of secrets and survival, told with breathless urgency by one of today’s leading thriller writers. A skillfully-constructed stunner of a novel.” —Tessa Wegert, author of The Kind to Kill

“Have You Seen Her is an edge-of-your-seat ride through the world of search and rescue where some of the characters have even more to lose than it appears. Cassie is a protagonist worth rooting for in this high-stakes thriller that gives a whole new meaning to the term ‘cliff-hanger.’” —Jessa Maxwell, author of The Golden Spoon

Catherine McKenzie was born and raised in Montreal, Canada. A graduate of McGill University in history and law, Catherine practiced law for twenty years before leaving to write full time. An avid runner, skier, and tennis player, she’s the author of numerous bestsellers including I’ll Never Tell and The Good Liar. Her works have been translated into multiple languages and I’ll Never Tell and Please Join Us have been optioned for development into television series. Visit her at CatherineMcKenzie.com or follow her on Twitter @CEMcKenzie1 or Instagram @CatherineMcKenzieAuthor.
Loading...
or support indie stores by buying on