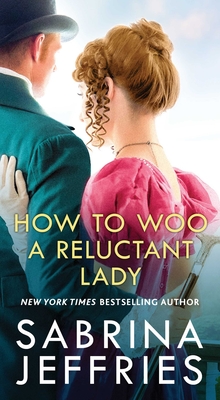 The third sizzling romance in the Hellions of Hallstead Hall series, from New York Times bestselling author Sabrina Jeffries, follows a fiercely independent woman as she schemes to avoid an arranged marriage...but she may lose her heart in the process.

Lady Minerva Sharpe’s grandmother has a life-changing ultimatum for her inheritance—get married. But Lady Minerva believes she’s come up with the perfect plan—embark on a fake engagement to a notorious rogue. Surely her grandmother would rather release her inheritance than have her married to a scoundrel. She just has to find one to play the part.

Luckily, there’s the wild barrister Giles Masters, the same man who has haunted her thoughts since he kissed her on her nineteenth birthday. Of course, she has no intention of falling for such a rake, much less marrying him. But soon, their fake betrothal leads to very real desire.

An untputdownable romance, How to Woo a Reluctant Lady “is richly imbued with steamy passion, deftly spiced with dangerous intrigue, and neatly tempered with just the right amount of tart wit” (Booklist).