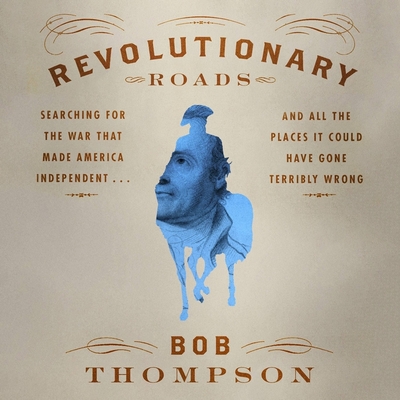 In the ride-along tradition of Sarah Vowell, Tony Horwitz and Bill Bryson, REVOLUTIONARY ROADS revisits the pivotal figures and key turning points of the American Revolutionary War. REVOLUTIONARY ROADS takes readers on a time-traveling adventure through the crucial places American independence was won and might have been lost. You'll ride shotgun with Bob Thompson as he puts more than 20,000 miles on his car, not to mention his legs; walks history-shaping battlefields from Georgia to Quebec; and hangs out with passionate lovers of revolutionary history whose vivid storytelling and deep knowledge of their subject enrich his own. Braiding these elements together into a wonderfully entertaining whole - and with a reporter's abiding concern for getting the story straight - he has written an American Revolution book like no other. The Revolutionary War is one of the greatest stories in all history, an eight-year epic filled with self-sacrificing heroes, self-interested villains, and, more interestingly, all the shades of complex humanity in between. It boasts large-scale gambles that sometimes paid off but usually didn't, as well as countless tiny, fraught tipping points like a misunderstood order in a South Carolina cow pasture that could have altered the course of the war. The drama is magnified when you consider what was at stake: the fate of a social and political experiment that would transform the world. Yet we don't know this story as well as we should, or how easily the ending could have changed.