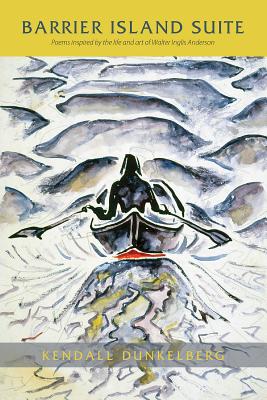 The poems of Barrier Island Suite are inspired by the life, art, and writings of Walter Inglis Anderson, who spent much of his adult life exploring the barrier islands of Mississippi, sketching and painting their flora and fauna, and chronicling his adventures in numerous logs. The islands form a liminal space between the land and sea, between  nature and culture, between madness and conformity. Elements of the Anderson’s life, including his travels, his struggles with mental illness, and his murals at Oldfields, the Ocean Springs Public School and Community Center, and the cottage at Shearwater Pottery are also incorporated.

In flotsam shoes, he
walks on water moccasins
and on copperheads.
Not immune to their venom
he suffers fevered visions.

He’s the young heron
seen climbing a dead pine spar
with feet, wings, and bill,
stretching out to mount a cloud
and take the heavens by storm.

KENDALL DUNKELBERG directs the low-residency MFA in Creative Writing at Mississippi University for Women in Columbus, Mississippi, where he also directs the Eudora Welty Writers’ Symposium. He has two previous collections of poetry, Landscapes and Architectures (Florida Literary Foundation Press, 2001) and Time Capsules (Texas Review Press, 2009). His poems and translations have appeared in many magazines.
Loading...
or
Not Currently Available for Direct Purchase