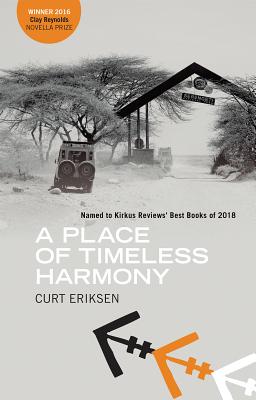 A Place of Timeless Harmony

When Richard Delmore and his lover Sofie Cerruti decide to escape from the confines of their affair in the Twin Cities, they choose the white sands of Zanzibar and the verdant slopes of the outer lip of the Ngorongoro Crater as their romantic destination.  It’s a temporary paradise they’re after, a reprieve from the limitations of the life of deception they lead in the States.

But once they begin their safari through the Serengeti the two lovers become spiritually lost in the teeming yet inhospitable plains of East Africa, where they are forced not only to deal with the consequences of the truths they have kept from each other—the deeper and darker secrets that are painfully worked out allegorically through the events that surround them—but to observe the contrast between their “civilized” and sophisticated lives in Minnesota, and the primitive and sometimes primordial world they have entered.

Clay Reynolds says, “I fell into the story easily, and the deeper I went into it I found myself more and more compelled by it and by the strong characters and counterpointing story…with stylistic flavorings reminiscent of Hemingway, Robert Ruark, and Paul Bowles, among other great writers of Africa, the novel displays the best of writing about the ‘Dark Continent’ but without becoming imitative or derivative.  Detail is astonishing in places, with vivid scenes that are very difficult to write out drawn with almost photographic clarity. A Place of Timeless Harmony is fresh and surprising, and in places rises to a critical mass in its descriptive power.”

Praise For A Place of Timeless Harmony: A Novel…

“Detail is astonishing in places, with vivid scenes that are very difficult to write out drawn with almost photographic clarity. A Place of Timeless Harmony is fresh and surprising, and in places rises to a critical mass in its descriptive power.”
—Clay Reynolds

“This artfully wrought story of one man’s coming to terms with his mortality far from home is rich in evocative detail. The sensual language belies a harsh, emotional reality, carefully observed.”
—Christina Shea

“Curt Eriksen’s debut makes the exotic feel familiar and the familiar feel utterly exotic and strange and fresh and fierce. A Place of Timeless Harmony opens the door on the beautiful world of a gifted and important writer.”
—William Lychack

Emotional turmoil seethes beneath the surface of a couple’s African safari in this debut novella.

Three years into their affair, Richard Delmore, a 50-something telecom executive, and Sofie Cerruti, a much younger journalist, go on safari in Tanzania, their first extended sojourn together away from his unwitting wife and children. Standing between them is Sofie’s recent abortion, which Richard argued her into despite previously claiming he wanted her to bear his child, and other secrets they haven’t told each other: Sofie’s liaison with an African man in Zanzibar while Richard was out diving; Richard’s diagnosis of pancreatic cancer. They arrive at Serengeti National Park as tourist spectators to the struggle for survival among the wildlife, which increasingly feels like a commentary on their own predicaments. After recovering from near-fatal heat stroke, the normally hardheaded Richard visits a local faith healer
rumored to have a potion that might cure his cancer. Meanwhile, Sofie, eager to see a kill, encounters a battle between a lion and a Cape buffalo—narrated with agonizing cinematic detail in a terrific action set piece—that upsets her pat notions of a benign cycle of life while reminding her of her own loss. Slender but rich, Eriksen’s Hemingway-esque tale revolves around a delicate dissection of a fraying relationship, writhing with unspoken regret and artful non-communication, whose real stakes are illuminated by the juxtaposition with primal scenes of life and death. His sharply observed, realistic prose is set against colorful, poetic evocations of the African setting, from the faith healer’s trash-strewn pilgrimage site to “the occasional Maasai warrior in the deep distance, carrying a long stick and wearing only his bright red shuka, walking like someone out of a Beckett play—as if he were in no hurry, and going nowhere—alongside his straggling herd of gaunt and hump-necked cattle.” It’s anything but harmonious, but Eriksen’s quietly wrenching yarn does resonate with ancient themes. A fine drama of two lovers discovering harsh realities.
--Kirkus Reviews
— Kirkus

Curt Eriksen was born in Kansas, but has spent half of his life in Europe. He lives between the Sierra de Gredos, in western Spain, and Boston. His short fiction, novel extracts, political commentary, and poetry have appeared in the US, UK, Canada, Australia, India, and Spain, in numerous print and online journals, including Blackbird, Rosebud, and Alba. He is an accomplished martial artist, and a certified instructor of both Taiji Quan and the Russian martial art of Samozashchita Bez Oruzhiya known as SAMBO. He holds an MA in Economics from the University of Maryland and an MFA from Lesley University in Cambridge, Massachusetts.
Loading...
or support indie stores by buying on