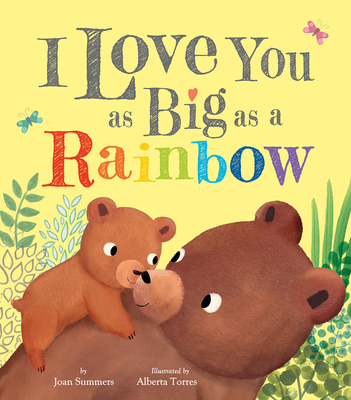 I Love You as Big as a Rainbow

After a rainbow appears in the sky and then disappears, Small Bear and Big Bear decide to make a rainbow together that will last forever. A gentle, touching story that celebrates the special love between parent and child.

After a gentle rain, Small Bear and Big Bear see a colorful rainbow appear in the sky. It's so beautiful that Small Bear wants to keep it, but then it melts away. The bears decide to make their very own rainbow from colorful items found outside, and this one will be special; it will last forever - just like their love for one another.

Joan Summers is originally from Cambridge, England, and now lives in sunny Devon with her family. She gets her inspiration for writing from spending time outdoors and watching her grandchildren play.

Alberta Torres is an Italian illustrator, currently based in London, England. She has been drawing since the age of 18 months, when the face of an upside-down Santa appeared through her crayons. Nature and animals appear the most in Alberta's drawings, as well as people from different cultural and ethnic backgrounds. In her spare time, Alberta loves traveling, running in the park, and taking care of her numerous plants.
Loading...
or
Not Currently Available for Direct Purchase