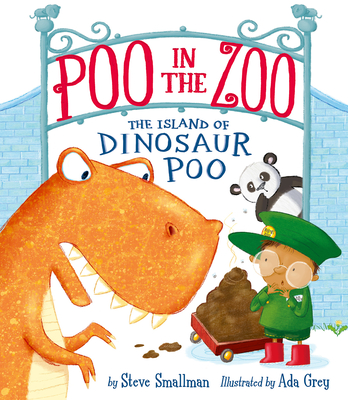 Poo in the Zoo

The Island of Dinosaur Poo

In this third installment of the hilarious books featuring zookeeper Bob McGrew and his zoo animals, the group travels along with Hector Gloop, the famous poop collector, to an island in search of a sample of elusive dinosaur poop. Will they find it?

Zookeeper Bob McGrew and poop collector Hector Gloop are back for another hilarious poop-filled adventure! The two, as well as all of the zoo animals, travel to an island in search of a sample of elusive dinosaur poop for Hector's collection. But when they get there, they are chased by a Tyrannosaurus rex--and bring home a special friend!

Steve Smallman has taken up writing his own stories after illustrating children's books for over 30 years. He also teaches illustration and mural-painting workshops in schools. When he's not working, Steve enjoys films, television, gardening, and walking in the countryside.

Ada Grey spent several years working for design companies before deciding that she preferred doodling. She lives in Brighton with her daughter and cat, Ming the Merciless. She collects picture books, draws in her studio (which is very messy), and loves cheese and spaghetti, especially together.
Loading...
or support indie stores by buying on