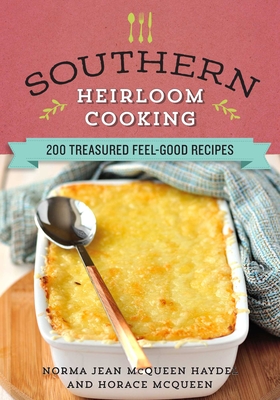 Everyone who knew Norma Jean McQueen Haydel knew that she’s a supreme cook and that she was the steward of the McQueen family recipes. But she didn’t measure when she cooked. Or write things down.

Norma Jean’s brother Horace got to worrying about this. He cooked, too, but his repertoire wasn’t as vast as Norma Jean’s. So he began bothering her about writing down how she made her many dishes.

“I didn’t want Norma Jean’s recipes, or our Mama’s recipes, to be lost. We have kids coming. And other folks love to eat at my sister’s table, too.”

So the two got busy recording their treasured family recipes from the South. This collection of more than 250 dishes includes their best ones. “This is food you will absolutely enjoy,” said Horace. “Traditional, full of marvelous flavor, ‘enhanced’ old-timeys.”

Norma Jean McQueen Haydel began cooking at an early age and, after a few years, could create a meal that rivaled her mother’s. Norma Jean and her husband, Joe, raised three boys. Then she pursued a career in banking and retired as a vice-president. Norma Jean and Joe lived in Natchez, Mississippi.

Horace McQueen tended fruit trees and vegetable and herb gardens for many years. He loved collecting and cooking Southern recipes from family friends. As a publisher's representative for nearly forty years, he sold many, many cookbooks and dreamed of creating this book—one that could be read and used. Horace and his wife Carleen lived in Houston, Texas.
Loading...
or
Not Currently Available for Direct Purchase