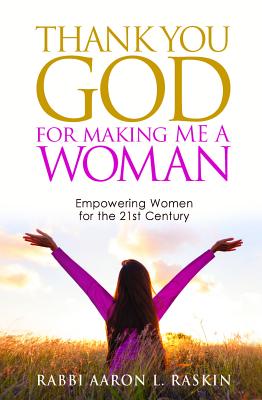 Thank You God for Making Me a Woman

Empowering Women for the 21st Century

THANK YOU GOD FOR MAKING ME A WOMAN

"The Torah believes in the potential and capabilities of every man, woman or child, Jew and gentile alike, and clearly believes that men and women were created equal, and with their own distinct, respected role in the world. " - Rabbi Aaron L. Raskin

Where would the Jewish people be without the discernment and wisdom of Jewish women - qualities they possess far in excess of men? Time and again, holy text and real-life experience prove this. "The Talmud reveals that it was in the merit of the righteous women that our forefathers were redeemed from the land of Egypt," writes the author. "About this, the Arizal explains that the souls of this generation are a reincarnation of those souls, and therefore, the women of this generation will once again bring about the redemption for all people."

This book aims to show that it is a mistaken belief that Judaism values the male contribution to its daily liturgy and life more than the female. In a clear and compassionate style, it lays out traditional observance and new scholarship with simple language. Ultimately, the Jewish woman's role as ubiquitous force in daily life becomes clear: her power is subtle, mystical, transformative. Her role isn't marginal, it's essential.

Mystical teachings tell us that women were granted understanding (bina) in greater measure, and therefore only they can transform a concept of wisdom (chochmah) into action (daat). Hence, we might extrapolate that no holy thing can come about if, in some way, a woman's wisdom is not behind it.

Discernment is a female quality; and it's time we understood and acknowledged its presence in daily Jewish life.
Online Listings Done: Other.