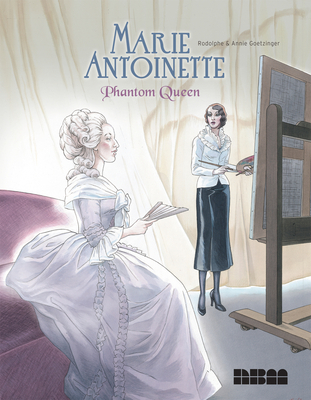 During the 1930s, Maud, an artist, discovers she has a psychic gift. The first signs manifest themselves in the royal gardens of the Trianon where gradually she understands that a woman from the beyond is attempting to communicate with her. The revelation is beyond belief: it is the ghost of Marie Antoinette appearing to her to share a terrible secret that has tormented her for centuries. After being guillotined, the Queen is said to have been thrown into a common grave but then exhumed and buried with her husband, Louis XVI, in the Saint-Denis basilica. Yet the ghost tells Maud that her remains are still in the pit on which a chapel stands today. The queen asks Maud to move her body to the right place so she can finally find peace and no longer haunt people. Part fantastic ghost story, part biography, this is a delicious beautifully illustrated look into French revolutionary history by the artist of the bestselling ‘Girl in Dior.’

Multiple award winner, including the prestigious Angouleme Awards, Rodolphe has been a literature professor, bookseller and journalist, writing many books from fiction to children’s books. Most of all he is celebrated in comics as a critic, exhibit organizer and writer where he has collaborated extensively with many of France’s major comics artists on over 150 diverse titles. One of the Grandes Dames of comics in France, Annie Goetzinger has had a distinguished and award winning career not only in comics but also in theater costume design and illustration, most notably for the newspaper Le Monde.
Loading...
or support indie stores by buying on
(This book is on backorder)