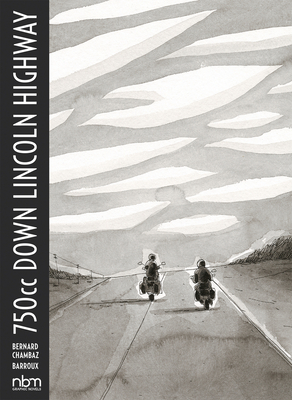 "I hate marathons. Hate running. An hour before the start, I received a text. Instead of 'Good luck,' it was 'We're finished.' So, I went to a bar next to the subway on 96th. Had a few bourbons with some other mope. Then I got on a bike and took off down the old Lincoln Highway." Forget Route 66. This is the original cross-country highway that takes you through REAL America, the first to cross all of the US from the Big Apple to the City on the Bay. This is THE road trip. On a 750cc bike.

Praise For 750cc Down Lincoln Highway…

"Like a Gallic Jim Jarmusch road movie (though shorter), this slim motorcycle diary has its moments." —Publishers Weekly

Barroux studied photography, art, sculpture, and architecture in France at the famous École Estienne and École Boule. He went on to work as an art director in Paris and Montreal. While in Montreal, Barroux began illustrating by creating linocut images, and he is now well known for his children’s book illustrations. Bernard Chambaz is a French novelist, historian, and poet, winner of several French literary prizes including the prestigious Goncourt for best first novel.
Loading...
or support indie stores by buying on