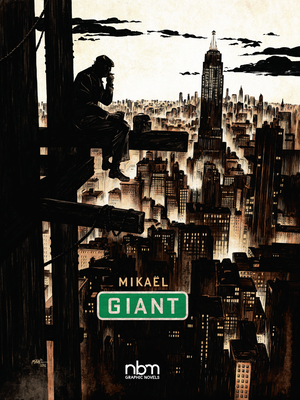 New York, early 1930s. A mysterious, laconic Irish colossus known as ‘Giant’ sweats blood, along with his fellow immigrants, to build the skyscrapers of Rockefeller Center. For a while, he has not received a reply to the typewritten letters he continues to send, as well as money, to the other side of the ocean, to Mary Ann, the wife of one of his colleagues who died accidentally. Giant, who seems to be afraid of nothing, still has not found the courage to reveal to the young woman that she is a widow ... What does her silence mean? An entrancing everyday working-class tale with the majestic background of the rising skyscrapers of New York.

"Set during the construction of Rockefeller Center in the 1930s, this spectacularly drawn historical epic brings Depression-era New York City to riotous, romanticized life. At the center of the sprawling narrative is Giant, a hulking, closemouthed steelworker who joins a crew of fellow Irish immigrants, “sky boys” working hundreds of feet off the ground on the rising edifice. Giant harbors secrets carried over from the old country, and he begins an epistolary relationship with the widow of a sky boy (pretending to be her husband, as he can’t bring himself to reveal to her that he’s died). But the storytelling is more about the new world: the personal dramas of Giant’s crewmates and tenement neighbors, as well as the city itself, the graphic novel’s most shining character. Mikaël draws bathhouses, brothels, Catholic churches, and Hoovervilles with enthusiasm and attention to period detail. The rich, classical illustration style, colored in sepia tones, respectfully recalls the art of old N.Y.C.’s great draftsman, Will Eisner. Set pieces, including a trip through Ellis Island and a visit to one of the early Macy’s Thanksgiving Day parades, are rendered with panache. The translation by Madden brings the operatic story down to earth with colorful period dialogue. This melodrama lives up to its inspiring setting, a muscular young city in a nation of immigrants, brimming with stories to tell." —Publishers Weekly

"Mikaël conjures drama in each frame, with high-contrast and earth and sepia-toned washes that fit the period feel, which is underscored by historical references." —Annie Bostrom, Booklist

An autodidact, the French-Canadian Mikael has illustrated award-winning children’s books and realized graphic novels since 2001. Among his awards are 2 Grand Prizes of the City of Quebec and a special mention of the jury for youth at Ouessant, France.
Loading...
or support indie stores by buying on