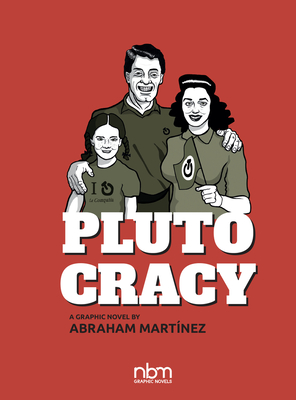 Chronicles of a Global Monopoly

2051. The world's largest company, The Company, has seized power on a planetary scale and runs the world as if it were a business. In a plutocracy, the richer one is, the more powerful one is. In this context, an anonymous citizen becomes compelled to uncover how the world came to this situation, without paying any attention to the official version. Several members of the government end up encouraging him to carry out this investigation by giving him access to all information. He decides to discover the true history of The Company and the various interests that are trying to influence his investigation.

Praise For Plutocracy: Chronicles of a Global Monopoly…

"Plutocracy is a piece of speculative fiction that presents a reality that is only different from ours in degrees. It is both chilling and illuminating, and like any great work it presents a story that will bring a reader to a new awareness of the reality around them." —William Kulesa, Jersey Journal

"Martínez’s script brims with tension, and his drawings combine thick inks and agitprop styling. This eye-opening outing will carry an unsavory sense of familiarity for many readers in this troubled time." —Publishers Weekly

"Highly entertaining while at the same time thought-provoking with respect to the role that plutocracy plays in the world today, Plutocracy: Chronicles of a Global Monopoly by Abraham Martinez is an absorbing read from first page to last." —Midwest Book Review

Abraham Martínez currently works as a cultural manager.
Loading...
or support indie stores by buying on