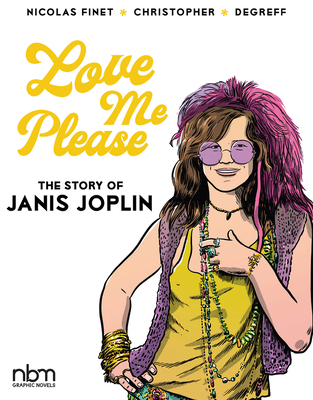 A biography in comics of the amazing rock singer Janis Joplin with the highlights of her journey from childhood after the Second World War to her abrupt death in late 1970. It is one of the most fabulous musical adventures in America of the second half of the twentieth century, yet it lasted only five years. How did a very young, messed up woman, a drug addict filled with doubt, become a planetary icon of rock music in a few years? Thanks to a worldwide movement of emancipation which would consecrate for a long time the ideals and modes of alternative lifestyles from counterculture to the flower power generation, Janis, the ugly duckling, gave free rein to her impulses. Fed by the thirst for freedom of the Beat Generation and the desire for emancipation expressed by American youth in the early 1960s, Janis Joplin left for San Francisco, the epicenter of cultural innovation. There, she abandoned herself to all impulses, overcoming without hesitation all the taboos of the time: bisexuality, alcohol, and drugs, doing so not only with delight, but with the taste for excess which came naturally from her spontaneous character.

Praise For Love Me Please!: The Story of Janis Joplin (NBM Comics Biographies)…

"Great for nostalgic hippie boomers as well as for those of any era who appreciate learning about Joplin’s magnetic personality and wondrous music." —NY Journal of Books

Christopher: author, illustrator, and journalist for a quarter of a century. This Anglo-Marseille native combines his passion for music in general, and rock in particular with comics with such comics work as adapting Bob Dylan and his latest work The Long And Winding Road, with artist Ruben Pellejero, a critically acclaimed "road-comic." In 2019, he co-authored Forever Woodstock with Nicolas Finet as well.

Nicolas Finet, author, publisher, filmmaker, journalist, curator, speaker, and translator, has worked in comics for more than three decades. He is the author of more than half a dozen reference works on it. In music, he has just made a documentary on the blues and comics, Mississippi Ramblin, devoted to bluesman Robert Johnson. He is the writer, also with Christopher, of Forever Woodstock.

Gilbert Shelton is a famous underground artist, one of the founding members of the Rip Off Press collective.