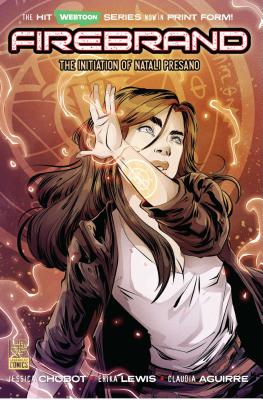 THE INITIATION OF NATALI PRESANO

The hit Legendary Comics' and Webtoon digital comic series is released in print for the first time with expanded artwork and bonus material!

Natali Presano never fit into her father’s perfectly human world: politically ambitious, he turned his back on her just when she needed him most. Losing her mother to tragedy as a young child, Natali fled the safety of home into the arms of her aunt Selena, the mysterious guardian of a magical order waging a centuries-old war for survival in the mountains of Spain.

Natali, now in her 20s, has followed in her aunt’s footsteps, becoming a powerful but rebellious witch in her own right. Returning to Seattle, she finds herself caught between a cruel modern world and the ancient evil threatening to destroy it.

Erika Lewis was born and raised in Washington, D.C., a place filled with politicians, but also magic. You just have to know where to look for it. Her list of credits straddle the comic and novel space, including Game of Shadows from Macmillan’s Tor Books, two Legendary Comics series FIREBRAND and ACURSIAN, and The 49th Key from Heavy Metal Publishing. She resides in the sunshine state of California. When she’s not writing she’s usually hiking, playing video games poorly, or at one of the bookstore or comic shops by her house. And always drinking coffee…
Loading...
or
Not Currently Available for Direct Purchase