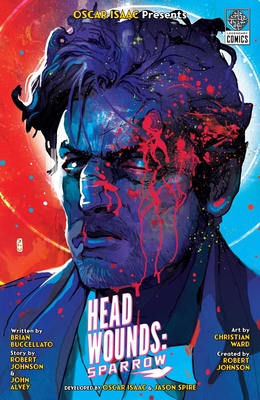 WHAT KILLS YOU MAKES HIM STRONGER

A detective with a higher purpose feels the pain and wears the wounds of those he’s failed to protect, and there’s only one way to stop the bleeding: vengeance.  As a divine battle of good and evil between Angels and Demons rages around him, can this crooked detective follow the straight-and-narrow to seek justice, or will he just save his own wounded skin as the fate of humanity hangs in the balance?

Brian Buccellato is a #1 New York Times best-selling author out of the comic book universe, where he is best-known for his work on DC Comics’ titles THE FLASH, BATMAN, and INJUSTICE. In 2017, he completed Universal Studios' Feature Writer Program and was a member of Dan Lin’s 2019 inaugural TV development Incubator at Rideback where he developed an original pilot for MRC. He previously adapted his Image comic series CANNIBAL for Square One, who also optioned his first creator-owned book, SONS OF THE DEVIL.  Brian’s recent comic work includes the yet to be released HEADWOUNDS for Legendary and Oscar Isaac, ARMORCLADS for Valiant Comics, and CHICKEN DEVIL, a new creator-owned with Aftershock Comics.

Raised in Queens, New York by a single Puerto Rican mother, Brian originally made his way into comics as a colorist for MARVEL and DC COMICS, before segueing to writing. He got his start in Hollywood working with director Tim Story, co-writing an indie thriller and eventually assisting on multiple studio films. A high school dropout who took the long road in life, Brian has gained a wealth of life experiences from odd jobs along the way, including working in a steel company, bartending, and ushering at a movie theater—all of which help to inform the grounded characters and worlds Brian creates. However, Brian’s most influential role in life is father to his twenty-year-old son, Paris, and young daughters Sophia and Olivia.

Christian Ward is a London-based illustrator, comic artist and writer.

Some of his clients include Marvel Comics, Dynamite Entertainment, The Guardian, Fence Records and Forbidden Planet amongst others.

Past comic-book projects include Image Comics' best seller The Infinite Vacation with Nick Spencer. He's also worked with Matt Fraction on The Time Ben Fell In Love a DHP Short, Kieron Gillen on Young Avengers and previously with Nathan Edmondson on his debut Image mini Olympus.
Loading...
or support indie stores by buying on