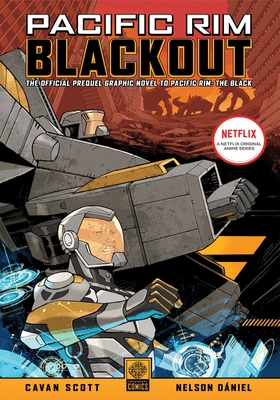 Herc Hanson, the PPDC Ranger returns as a world-weary jaeger pilot dragged into battle as an influx of kaiju threatens to destroy the Australian continent and all its inhabitants. Along with his niece Olivia, his copilot Cooper, and Marshal Rask, Herc faces brand-new kaiju of epic proportions while battling his own inner demons.

A lead story architect for Lucasfilm’s bestselling multimedia initiative, Star Wars: The High Republic, Cavanhas written comics for Marvel, DC Comics, Dark Horse, IDW, Legendary, 2000AD and more. He is currently developing a number of new properties for television and film and is the creative director of Strange Matter, the production company he founded with fellow Star Wars writer George Mann in 2019.

A former magazine editor, Cavan lives in the United Kingdom with his wife and daughters. His lifelong passions include folklore, audio drama, the music of David Bowie and scary movies. He owns far too much LEGO

Nelson Dániel has worked for over 15 years in films and commercials as an art director, production designer, storyboard and concepts artist for films like Aftershock and Eli Roth’s Green Inferno, Robert Rodriguez’s Machete, among others. Nelson lives in Chile, where he has published his graphic novels Lucca, 1899 and 1959. He also did all art and colors on The Cape: 1969, monthly series Judge Dredd, Dungeons and Dragons, Clue, Teenage Mutant Ninja Turtles and the Stephen King/Joe Hill collaboration, Road Rage, in addition to the single issues and covers of Ghostbusters, G.I. Joe, Transformers and more. He has also worked with Legendary Comics on the Detective Pikachu graphic novel. He has also worked as colorist for Marvel and IDW on series such as The Cape, Wild Blue Yonder, The Island of Dr. Moreau and the 2015 Eisner Award-winning best limited series, Little Nemo: Return to Slumberland, where he was also nominated for best colorist.
Loading...
or support indie stores by buying on