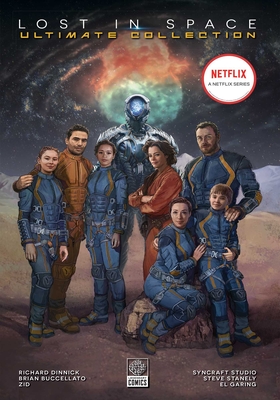 The smash-hit rebirth of the beloved sci-fi classic continues in this thrilling graphic novel expansion to the series, which takes the Jupiter 2™ where it has never been before.

30 years in the future, en route to a distant colony, the Robinson family finds itself thrown off course when their ship crash-lands on a mysterious and dangerous planet.

In this stunning new omnibus collection, these untold adventures feature the full crew of the hit Netflix show: the Robinsons, the Robot, Doctor Smith and Don West. These are the missions you didn’t see on TV—as our heroes struggle to survive in an unknown world, they face new creatures, unexpected visitors, and new danger.

Plus! Never before published: Worlds collide as the classic crew of the 1960s Jupiter meet their modern counterparts in a story that celebrates all eras of Lost in Space!

Richard Dinnick is a British writer for TV, comics and books. He is a member of the Writers’ Guild, BAFTA for whom he has served as a judge and is a visiting lecturer in scriptwriting at several universities in the UK. He is the creator of Legendary Entertainment’s ROB (a new twist on the Robin Hood mythos) and of After-Shock Comics’ LAST LINE. Richard has his own TV dramas in development on both sides of the Atlantic and has written on several TV shows, across the globe from the UK and USA to India and Dubai, including the latest series of THUNDERBIRDS ARE GO! for ITV and Amazon Studios, and won the British Screenwriters' Award for Best Children’s TV Show in 2018 for his work on the BBC’s GO JETTERS. Richard is the lead writer on the tie-in comic for Netflix’s hit show LOST IN SPACE – also for Legendary Entertainment – and has new IP coming next year in the form of comic books yet to be announced as well as work on existing franchises. Richard has several Titan Comics’ DOCTOR WHO series under his belt and has written many titles for the franchise's book range released by Penguin Random House.

Brian Buccellato is a #1 New York Times best-selling author out of the comic book universe, where he is best-known for his work on DC Comics’ titles THE FLASH, BATMAN, and INJUSTICE. In 2017, he completed Universal Studios' Feature Writer Program and was a member of Dan Lin’s 2019 inaugural TV development Incubator at Rideback where he developed an original pilot for MRC. He previously adapted his Image comic series CANNIBAL for Square One, who also optioned his first creator-owned book, SONS OF THE DEVIL.  Brian’s recent comic work includes the yet to be released HEADWOUNDS for Legendary and Oscar Isaac, ARMORCLADS for Valiant Comics, and CHICKEN DEVIL, a new creator-owned with Aftershock Comics.

Raised in Queens, New York by a single Puerto Rican mother, Brian originally made his way into comics as a colorist for MARVEL and DC COMICS, before segueing to writing. He got his start in Hollywood working with director Tim Story, co-writing an indie thriller and eventually assisting on multiple studio films. A high school dropout who took the long road in life, Brian has gained a wealth of life experiences from odd jobs along the way, including working in a steel company, bartending, and ushering at a movie theater—all of which help to inform the grounded characters and worlds Brian creates. However, Brian’s most influential role in life is father to his twenty-year-old son, Paris, and young daughters Sophia and Olivia.

Artist El Garing loves illustrations. He migrated to the United States many years ago to follow a dream, and met his hero personally, The Great Frank Frazetta, who is always an inspiration. El was mentored by one of the best, Hal Santiago, and was taught by Philippines National Artist Francisco V. Coching.
Loading...
or support indie stores by buying on