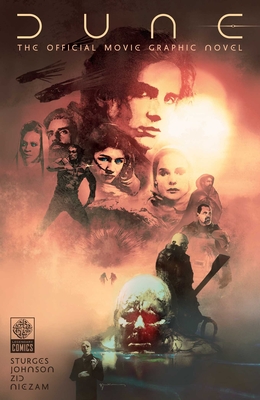 A mythic and emotionally charged hero’s journey, Dune tells the story of Paul Atreides, a brilliant and gifted young man born into a great destiny beyond his understanding, who must travel to the most dangerous planet in the universe to ensure the future of his family and his people. As malevolent forces explode into conflict over the planet’s exclusive supply of the most precious resource in existence—a commodity capable of unlocking humanity’s greatest potential—only those who can conquer their fear will survive.

Lilah Sturges is the writer of numerous comics, including the PRISM Award winning Lumberjanes: The Infernal Compass and The Magicians and Legendary Comics’ upcoming The Science of Ghosts, as well as many other titles from DC, Marvel, IDW, and others. She lives in Austin, Texas with two daughters and two cats.

Drew’s contributions to Legendary Comics’ Monsterverse include illustrating GODZILLA: DOMINION, GODZILLA: AFTERSHOCK, the official graphic novel prequel to GODZILLA: KING OF THE MONSTERS, and cover art on the final issue of the KONG: SKULL ISLAND series.

Zid was born 2 days after Christmas in 1983, and he is living his childhood dream drawing and painting what he has always been most passionate about: comics. He is a multidisciplinary artist based in Malaysia and was nominated at #8 in 10 Comic Book Creators To Watch in 2013 on Newsarama.com for his maiden project with Robert Napton. His career with Legendary Comics began with Trick ‘r Treat: Monster Mash in late 2015. This work relationship continued with the digital graphic novel prequel to the Netflix movie Spectral: Ghosts of War in 2016, and his biggest responsibility yet, Skull Island: The Birth of Kong in 2017. After a change of terrain with Lost in Space: Countdown to Danger, he returned to Skull Island for Kingdom Kong. In his free time (which is not a lot), you can see him updating his social media accounts with his slice of life comic as a work-from-home dad under the hashtag #DOAWFHD.
Loading...
or support indie stores by buying on