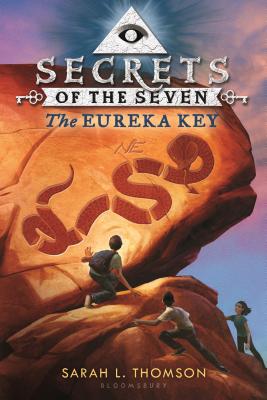 The Eureka Key (Secrets of the Seven)

When middle school puzzle master Sam and history wiz Martina win a contest for a summer trip across the US, they discover they've been drafted into something vastly more extraordinary. Joining another kid on the trip, Theo, a descendant of George Washington himself, they must follow clues to find seven keys left behind by the Founding Fathers. Together the keys unlock Benjamin Franklin's greatest invention--a secret weapon intended to defend the country. Each key is hidden in a unique location around the U.S., protected with puzzles, riddles, and traps. This has kept the weapon safe . . . until now! Gideon Arnold, a dangerous descendant of the infamous Benedict Arnold, is on the chase.

In competition with Arnold and his thugs to reach the artifacts first, Sam, Martina, Theo, and readers must use their wits to solve ingenious puzzles, escape death-by-booby-trap, and, by the end of the series, save our nation by uncovering many of its greatest secrets.


Praise For The Eureka Key (Secrets of the Seven)…

"History buffs will like the cool notion that descendants of important people are still battling it out (George Washington and Benedict Arnold family members pop up), and readers who are puzzle fans may enjoy being a step ahead of the story." - BCCB

"A good beginning to the Secrets of the Seven series. Recommended." - School Library Connection

"In addition to learning bits of American history, readers will be challenged by the codes and riveted by Thomson’s account of the kids’ episodic, death-defying journey. A fast-paced quest narrative with plenty of action and a gradually developing bond among the three main characters." - Booklist

"Nonstop action is punctuated by a series of puzzles that require knowledge of trivia, strength, and creative thinking to solve." - Kirkus Reviews

"Readers will enjoy the deductive reasoning involved and the high-stress situations the kids find themselves in as they try to stay one step ahead of the deadly bad guys. This story has the feeling of a computer game that relies on knowledge of American history to advance . . . will appeal to history buffs, puzzle fans, and reluctant readers." - School Library Journal

Sarah L. Thomson is an award-winning author who has published more than thirty books for young readers, including the Secrets of the Seven series, Deadly Flowers, and Dragon's Egg. Sarah lives in Portland, Maine, with her daughter and her two cats. Her daughter helps with inspiration, and her cats help by lying on the piece of paper she needs most.
www.sarahlthomson.com
www.secretsoftheseven.com