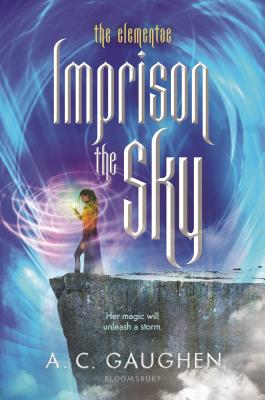 Imprison the Sky (The Elementae)

"[A] fantasy romance in the vein of books by Sabaa Tahir, Renee Ahdieh." - School Library Journal on Reign the Earth

The sweeping Elementae series continues with a heroine so powerful she can command the sky . . .

Stolen from her family as a child, Aspasia has clawed her way up the ranks of Cyrus's black market empire to captain her own trading vessel--and she risks it all every time she uses her powerful magic to free as many women, children, and Elementae from slavery as she can.

But Cyrus is close to uncovering her secrets--not only that Aspasia is a wind Elementa with the ability to sail her ship through the sky, but that she is also searching for her lost family. And if Aspasia can't find her younger siblings before Cyrus does, she will never be able to break free.

Armed with her loyal crew full of Elementae and a new recruit who controls an intriguing power, Aspasia finds herself in the center of a brewing war that spans every inch of the ocean, and her power alone may not be enough to save her friends, family, and freedom.


Praise For Imprison the Sky (The Elementae)…

“Gaughen weaves big concepts into the action-filled story. . . . Powerful young women who have hope and agency to change the world: What could be more timely?” —Kirkus Reviews

“Aspasia is a bold, complex heroine. . . . A deliciously satisfying romance of mutual support and dedication to hope, joy, and art as essential components of resistance.” —BCCB

“A series opener with depth. . . . Gaughen delivers an emotionally resonant tale full of magic so powerful it can move the earth; rich writing and worldbuilding will appeal to readers seeking complex characters, palace intrigue, and weighty questions of power and loyalty.” —Starred review, Publishers Weekly on REIGN THE EARTH

“A tale of staggering magic, cutthroat royalty, and lethal intrigue. . . . Gaughen weaves a compelling feminist fantasy. Shalia is a refreshingly strong heroine with a voice that leaps off the page. Her story will both break readers' hearts and urge them onward, anxious to know how Shalia grapples with her destiny.” —Booklist on REIGN THE EARTH

“A manifesto of female strength. . . . The readers who flock to this will find more than they expected, and Shalia's strength will give them something truly worth swooning over.” —Kirkus Reviews on REIGN THE EARTH

“Another fantasy romance in the vein of books by Sabaa Tahir, Renee Ahdieh, and Sarah Maas, this volume will have teens clamoring for a sequel. Shaila matures from a frightened girl in a foreign land to a woman unwilling to allow her destiny or desires to be controlled by the men around her.” —School Library Journal on REIGN THE EARTH

“The intense action scenes and Shalia's strong narrative voice keep the reader on edge and engaged.” —School Library Connection on REIGN THE EARTH

“Shalia's story unfolds slowly, smoldering before it rages into an enormous fire. It builds in a powerful way, drawing the reader into a larger plot than they ever expected. . . . Reign the Earth is sure to inspire a dedicated fan base eager for the next tale.” —Foreword Reviews on REIGN THE EARTH

“With a clever, strong-willed heroine, a downright terrifying villain, and complex relationships that leap off the page, Reign the Earth is the feminist fantasy I didn't know I needed. I will be thinking about Shalia's strength and fearlessness (and swooning over the slow-burn romance) as I anxiously await book two!” —Erin Bowman, author of VENGEANCE ROAD on REIGN THE EARTH

A. C. Gaughen is a freelance writer and regular blogger who has had several stories published in the Chicken Soup for the Soul series. She attended college in Scotland but now lives in Massachusetts, USA.
Loading...
or support indie stores by buying on