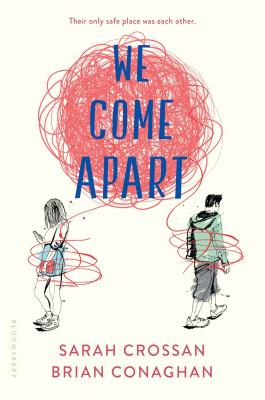 A poetic, gifty offering that combines first love, friendship, and persistant courage in this lyrical immigration story told in verse. Award-winning authors Brian Conaghan and Sarah Crossan tell a thought-provoking dual-narrated tale about two troubled teens, one immigrating to a new home and the other facing domestic violence, whose paths cross in the unlikeliest of places.

Nicu has emigrated from Romania and is struggling to find his place in his new home. Meanwhile, Jess's home life is overshadowed by violence. When Nicu and Jess meet, what starts out as friendship slowly blossoms into romance as the two bond over their painful pasts and their hope and dreams of a better future. But will they be able to save each other, let alone themselves?

This illuminating story told in dual points of view through vibrant verse will stay with readers long after they've finished.

Winner of the 2018 UKLA Book Award


Praise For We Come Apart…

"This crushingly honest story effectively confronts issues of racism, abuse, and bullying, while admitting that often there’s no easy answers to misery." - Booklist

"This contemporary star-crossed love affair is convincing and moving--and also a heartbreakingly timely portrayal of discrimination and bullying in Brexit-era London." - The Horn Book Magazine

"Told in verse through alternating viewpoints, this is a powerful novel about how friendship and love are sometimes not enough to ensure a happy-ever-after ending . . . A fast-paced and memorable story that will resonate with teens." - School Library Journal

"An uncompromising look at the effects of Tourette’s, autism, and Oppositional Defiant Disorder on those who have them and their friends and family." - Publishers Weekly on WHEN MR. DOG BITES

"An unusual coming-of-age tale that is thoroughly engaging." - VOYA on WHEN MR. DOG BITES

"Crossan’s ear is flawless in capturing the cries of a young girl’s heart." - BCCB on APPLE AND RAIN

"[The] story is involving, and Apple and Rain are engaging, sympathetic characters. This one is for readers who dote on happy endings." - Booklist on APPLE AND RAIN

"Crossan’s verse packs a punch as she examines the power that difference -- but also determination -- can wield." - starred review, Publishers Weekly on THE WEIGHT OF WATER

"A powerful coming-of-age novel." - Booklist on THE WEIGHT OF WATER

Brian Conaghan was born and raised in the Scottish town of Coatbridge but now lives in Dublin. He has a Master of Letters in Creative Writing from the University of Glasgow. For many years Brian worked as a teacher and taught in Scotland, Italy and Ireland. His first YA novel for Bloomsbury, When Mr Dog Bites, was shortlisted for the 2015 Carnegie Medal, and his second, The Bombs That Brought Us Together, won the 2016 Costa Children's Book Award. We Come Apart, a verse novel co-authored with Carnegie Medal winner Sarah Crossan, won the 2018 UKLA Book Award, and his fourth novel, The Weight of a Thousand Feathers, won the 2018 Irish Book Award for Teen & Young Adult Book of the Year.