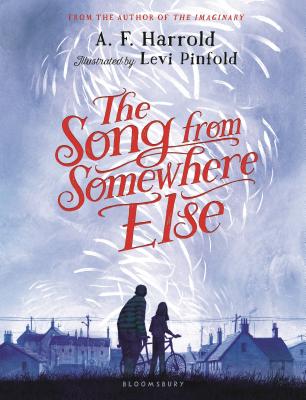 The Song From Somewhere Else (Hardcover)

From the author of the critically acclaimed The Imaginary comes a powerful story about friendship in the vein of Roald Dahl and Neil Gaiman.

Frank thought her summer couldn’t get any worse--until big, weird, smelly Nick Underbridge rescues her from a bully, and she winds up at his house.

Frank quickly realizes there’s more to Nick than meets the eye. When she’s at his house, she hears the strangest, most beautiful music, music which leads her to a mysterious, hidden door. Beyond the door are amazing creatures that she never even dreamed could be real. For the first time in forever, Frank feels happy . . . and she and Nick start to become friends.

But Nick’s incredible secrets are also accompanied by great danger. Frank must figure out how to help her new friend, the same way that he has helped her.

A.F. Harrold is an English poet (1975 - present). He writes and performs for adults and children, in cabaret and in schools, in bars and in basements, in fields and indoors. He was Glastonbury Festival Website's Poet-In-Residence in 2008, and Poet-In-Residence at Cheltenham Literature Festival in 2010. He won the Cheltenham All Stars Slam Championship in 2007 and has had his work on BBC Radio 4, Radio 3 and BBC7. He is active in schools work, running workshops and slams and doing performances at ungodly hours of the morning, and has published several collections of poetry. He is the owner of many books, a handful of hats, a few good ideas and one beard.

Praise For The Song From Somewhere Else…

"A.F. Harrold's work is masterfully paced and stunningly crafted; the story unwinds at a deliberate clip, the characters moving through a world that is at first dark, then mesmerizing, then cooly terrifying . . . Simply beautiful . . . [A] glorious and spine-chilling tale for middle grade readers." - Shelf Awareness

"Strong characterizations and a good dose of spookiness are standouts in this illustrated novel . . . Hand to fans of Neil Gaiman’s Coraline, Holly Black’s Doll Bones, and other books that balance scariness and substance." - starred review, School Library Journal

"Friendship, acceptance, trust, and decency weave their magic throughout Harrold’s tale . . . Lush black-and-white illustrations by Pinfold enhance the secrecy, wonder, and mood of the story." - Booklist

"British poet Harrold writes with an engaging voice rich with character . . . Spot illustrations and immersive double-page black and white drawings are captivating in their intricacy and melancholy, blending perfectly with the poignant tone that resonates through the whole novel." - BCCB

"[An] inventive mix of humor and suspense . . . A great choice for readers who like fantastic tales with a dose of true scariness." - starred review, School Library Journal on THE IMAGINARY

"Most affecting and lovely when describing powerful relationships." - The New York Times Book Review on THE IMAGINARY