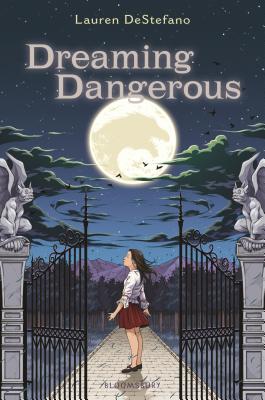 Tucked deep in the woods and surrounded by a great iron fence lies Brassmere Academy for the Extraordinary, a school for orphans with strange and wonderful gifts. Twelve-year-old Plum has lived there for as long as she can remember. Each night, she ventures into her dreams alongside her three best friends, Vien, Gwendle, and Artem to fight monsters and journey on dangerous quests.

But one night, Plum gets a mysterious warning that she and her friends are no longer safe. And the next morning, Artem is nowhere to be found.

As Plum, Vien, and Gwendle search for their friend--in both the dreaming and waking worlds--they start to uncover alarming secrets about Brassmere and its intentions. Will they be able to find Artem before it’s too late, or will they be next to disappear?

"Will grip readers from prologue to epilogue. . . . A natural fit for Stranger Things fans, this eerie novel is a gem." - starred review, Booklist

"The build-up of this creepily atmospheric novel unfolds with perfect pacing . . . An engaging addition to the magical school story genre, with a reassuring warmth and optimism to its conclusion." - BCCB

"DeStefano explores the bonds of friendship through the lens of dreams and the freedom that imagination can offer, and her gothic-flavored story is by turns lovely and harrowing." - Publishers Weekly

"DeStefano packs a lot of emotion into a tightly focused narrative--especially as Emmaline discovers what it means to lose a memory of a loved one--and offers a quiet approach to understanding different ways of grieving." - The Horn Book Magazine on THE GIRL WITH THE GHOST MACHINE

"The relationships DeStefano builds between her characters are sweet and piercingly true." - Publishers Weekly on THE GIRL WITH THE GHOST MACHINE

"The plot, replete with buried bones, a terrible house of punishment for "problem" children, and more, will keep kids reading all night long (albeit with the lights on). DeStefano. . . . is no stranger to atmospheric middle-grade books, and is impressively amassing work that rivals that of older authors known for scary mysteries, such as Mary Downing Hahn and Zilpha Keatley Snyder." - starred review, Booklist on THE PECULIAR NIGHT OF THE BLUE HEART

"The idea that things that can be okay even if they’re not perfect is carefully and deeply explored, giving readers a chance to ponder this important concept. . . . Offer this to readers who appreciate ghost stories with plenty of character development." - BCCB on THE PECULIAR NIGHT OF THE BLUE HEART

"Spooky yet heartfelt." - School Library Connection on THE PECULIAR NIGHT OF THE BLUE HEART

"Dark but often funny. . . . Fans of Holly Black’s Doll Bones may well enjoy this creepy, character-based tale." - The Horn Book on A CURIOUS TALE OF THE IN-BETWEEN

"Readers will be hooked from the first line of this lyrical and suspenseful mystery/fantasy (part thriller too). . . . a moving and multilayered tale. . . . Love, loss, and hope are at the heart of this exciting read." - Kirkus Reviews on A CURIOUS TALE OF THE IN-BETWEEN

Lauren DeStefano is the New York Times and USA Today bestselling author of The Girl with the Ghost Machine, The Peculiar Night of the Blue Heart, A Curious Tale of the In-Between, The Internment Chronicles, and The Chemical Garden trilogy, which includes Wither, Fever, and Sever. She earned her BA in English with a concentration in creative writing from Albertus Magnus College in Connecticut.
LaurenDeStefano.com
@LaurenDeStefano
laurendestefano.tumblr.com