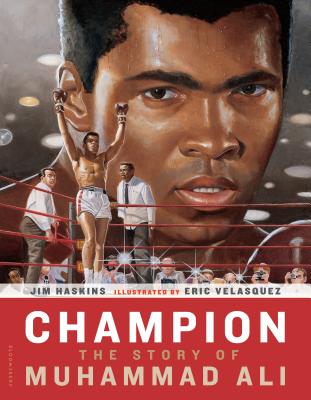 Muhammad Ali was one of the most electrifying, inspiring, and confrontational athletes of his generation. At the height of his boxing career, Ali was as despised as he was adored. Loud and aggressive as well as confident and dedicated, he was the quintessential showman, the undeniable champion of his sport, and one of the most recognizable faces in the world. He was challenged at every turn: faced with racial discrimination in his everyday life, mocked by the sports media as his career began, ridiculed for adopting a new religion, and stripped by the U.S. government of his very livelihood for refusing to go to war.

Muhammad Ali faced the obstacles in his life the way he faced his opponents in the ring, brashly and with all the force at his command. In his private life, he was also deeply spiritual, committed to standing up against social injustice, and steadfast in his beliefs. Featuring stunning illustrations and covering his entire life from childhood through his professional career to his end of life battle with Parkinson's Syndrome, this is a moving tribute to the legacy of this impressive figure.


Praise For Champion: The Story of Muhammad Ali…

"Haskins and Velasquez pay tribute to Muhammad Ali in this rather adoring yet noteworthy biography, which brings to light the boxing great's many types of triumphs...Velasquez does justice to the subject with his imaginatively conceived oil paintings; sometimes these approach a photographic crispness, sometimes they suggest Ali's inner victories and struggles. Informative and inspiring." - starred review, Publishers Weekly

"This book should find an immediate audience." - School Library Journal

ERIC VELASQUEZ is the author and illustrator of Grandma's Records and Grandma's Gift, a Pura Belpré Award winner. He is also the illustrator of The Price of Freedom; I, Matthew Henson, which received four starred reviews; Jesse Owens: Fastest Man Alive, which received two starred reviews; and The Piano Man, for which he won the Coretta Scott King/John Steptoe New Talent Award. He is a graduate of the School of Visual Arts and lives in New York. www.ericvelasquez.com
Loading...
or
Not Currently Available for Direct Purchase