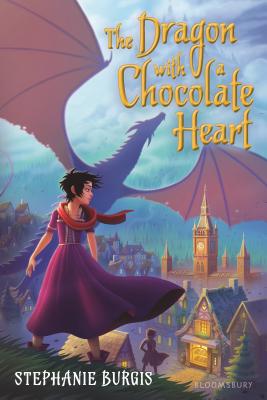 The Dragon with a Chocolate Heart

A classic fantasy with terrific girl power (and chocolate), perfect for fans of Shannon Hale and Jessica Day George.

Aventurine is a brave young dragon ready to explore the world outside of her family's mountain cave . . . if only they'd let her leave it. Her family thinks she's too young to fly on her own, but she's determined to prove them wrong by capturing the most dangerous prey of all: a human.

But when that human tricks her into drinking enchanted hot chocolate, she's transformed into a puny human without any sharp teeth, fire breath, or claws. Still, she's the fiercest creature in these mountains--and now she's found her true passion: chocolate. All she has to do is get to the human city to find herself an apprenticeship (whatever that is) in a chocolate house (which sounds delicious), and she'll be conquering new territory in no time . . . won't she?


Praise For The Dragon with a Chocolate Heart…

“A gloriously fresh story to be read with a steaming cup of chocolate at hand.” —Kirkus Reviews

“Burgis creates a feisty protagonist with a temper that suits her dragon heritage. . . . Readers will be rooting for Adventurine throughout this well-paced, colorful narrative. An appealing chapter book for young fantasy fans.” —Booklist

“Aventurine's fiery spirit is immediately endearing, and a diverse cast of fully realized supporting characters fill out a fantasy world that readers will love to inhabit. Pair with chocolate for maximum enjoyment . . . will satisfy readers who hunger for feel-good tales that pack a girl-power punch, like Gail Carson Levine's Ella Enchanted or the movie Moana.” —School Library Journal

“Burgis' debut title rides on its swift pace and the delightfully feisty Kat, whose fearless and frequently impulsive actions will have readers cheering her on.” —Booklist on KAT, INCORRIGIBLE

“Regency romance and fantasy adventure all in one, this is a satisfying read and a promising beginning to a trilogy that is sure to be popular.” —School Library Journal on KAT, INCORRIGIBLE

Stephanie Burgis grew up in East Lansing, Michigan, but now lives in Wales with her husband and two sons, surrounded by mountains, castles and coffee shops. She is the author of the tween fantasy trilogy, Kat, Incorrigible and the forthcoming historical fantasy adult title, Masks and Shadows.
www.stephanieburgis.com
@stephanieburgis