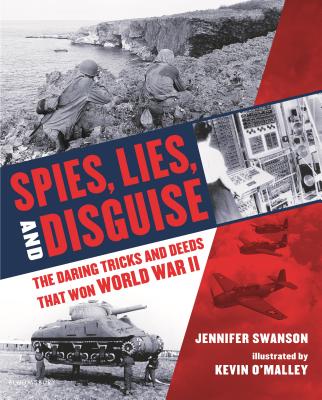 The Daring Tricks and Deeds that Won World War II

In the late 1930s, times were desperate. The world found itself at war again, less than twenty years after the first World War had ended. No one could quite believe it. And no one wanted it. The leaders of every country involved were left with no choice. They had to try to end the war as fast as possible, using whatever means they could.
That meant coming up with secret operations meant to deceive, deflect, and confuse their enemies. Poison the cattle that the Germans eat? Deliberately float a corpse dressed up as a spy across the water to have it wash up on Germany's shore? Create a unit of top secret commandos with a license to kill? These were all real tactics attempted with the ultimate goal of defeating Hitler. In this off-center look at history, readers will be captivated by the classified and covert efforts made by each side as they tried to gain the upper hand and win the war. Restricted access is lifted to give the reader a peek into the top secret operations of the daring men and women who fought the war under a cloak of secrecy.


Praise For Spies, Lies, and Disguise: The Daring Tricks and Deeds that Won World War II…

“This book is over 100 pages of fun. It offers clever brain challenges, activities designed to give the brain a much-needed break, and even explains how the Rubik's Cube can actually improve the thinker's life... The pictures are vibrant and detailed, leaving nothing to the brain enthusiast's imagination.” —New York Journal of Books

“This book will capture your attention from the very beginning!” —School Library Connection

Jennifer Swanson is the award-winning author of over 35 children's books. A self-professed science geek, she started a science club in her garage when she was 7 years old. When not researching cool STEM stuff or writing about it, you can find her walking along the beach with her husband and her dogs, looking for shells.

KEVIN O'MALLEY is the co-author and illustrator of the popular Miss Malarkey series as well as the award-winning Once Upon a Cool Motorcycle Dude and the national bestseller Gimme Cracked Corn and I Will Share. He lives in Maryland. www.booksbyomalley.com
Loading...
or
Not Currently Available for Direct Purchase