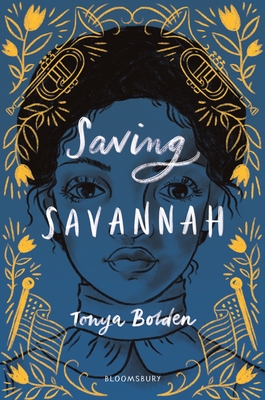 From acclaimed author Tonya Bolden comes the story of a teen girl becoming a woman on her own terms against the backdrop of widespread social change in the early 1900s.

Savannah Riddle is lucky. As a daughter of an upper class African American family in Washington D.C., she attends one of the most rigorous public schools in the nation--black or white--and has her pick among the young men in her set. But lately the structure of her society--the fancy parties, the Sunday teas, the pretentious men, and shallow young women--has started to suffocate her.

Then Savannah meets Lloyd, a young West Indian man from the working class who opens Savannah's eyes to how the other half lives. Inspired to fight for change, Savannah starts attending suffragist lectures and socialist meetings, finding herself drawn more and more to Lloyd's world.

Set against the backdrop of the press for women's rights, the Red Summer, and anarchist bombings, Saving Savannah is the story of a girl and the risks she must take to be the change in a world on the brink of dramatic transformation.

“The story is richly complex in its historical detail…a valuable portrayal of affluent African-American society and of post-WWI life.” —Publishers Weekly

“Seamlessly weaves aspects of black history into the detailed narrative. . . . Victoria emerges as a fully realized character, a product of all her experiences. The depiction of Washington, D.C.'s African-American elite is rich and complex . . . A compelling and significant novel.” —Kirkus Reviews, starred review, on INVENTING VICTORIA

“The rich descriptions of people and life in early America will fascinate readers as the book introduces them to this widely overlooked population in history.” —Booklist on INVENTING VICTORIA

“The well-executed premise, a compelling love story, and unique historical details will appeal to fans of Ruta Sepetys's Salt to the Sea . . . This moving and engrossing portrayal of a little-known historical tragedy belongs on all YA shelves.” —SLJ, starred review, on CROSSING EBENEZER CREEK