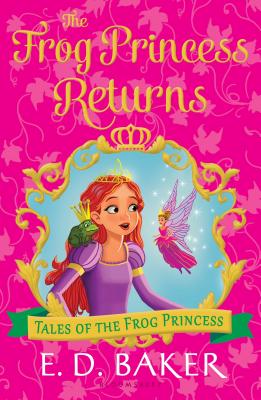 Fans of E. D. Baker's The Frog Princess, rejoice! Fifteen years after the original, Princess Emma, Prince Eadric, and all the beloved characters are back for another magical adventure from popular author E. D. Baker.

Two weeks after Emma's birthday, Prince Eadric -- having been turned from a frog into a human again -- is still in Greater Greensward. One day, a beautiful princess named Adara arrives at the castle in Greater Greensward for a visit, claiming to be Emma's distant cousin. But Adara has other motives that threaten Emma and Eadric's blossoming romance.

Meanwhile, something is very wrong in Greater Greensward. Crops are dying, streams are drying up, and large sections of trees in the enchanted forest are withering -- all because the Fairy Queen has disappeared. Without her, there is no peace in the magical kingdom, and dangerous foes threaten to take advantage of her absence. Only brave, tenacious Emma with her knowledge of the land can restore order . . . but first she must set out on a journey unlike any before.

"Featuring comic scenes, a romantic subplot, and wacky animal, fairy, and witch characters . . . This humorous, ongoing extension of the frog-turned-prince saga should appeal to fans of the series." - Kirkus Reviews

"High-spirited romantic comedy. . . . Fans of Gail Carson Levine’s Princess Tales should leap for it." - Kirkus Reviews on THE FROG PRINCESS

"As magically adventurous as fantasy can get." - VOYA on DRAGON'S BREATH

"Quests, tests, hearts won and broken, encounters with dragons, and plenty of magic . . . As tasty as its prequel." - School Library Journal on DRAGON'S BREATH

"Baker's . . . vividly imagined fantasy world . . . [is] irresistible and loaded with humor." - VOYA on ONCE UPON A CURSE

"Kids will get a kick out of the hip Shrek vibe . . . in this updated fairy tale." - School Library Journal on NO PLACE FOR MAGIC