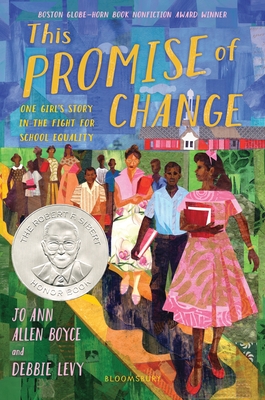 This Promise of Change

One Girl’s Story in the Fight for School Equality

In 1956, one year before federal troops escorted the Little Rock 9 into Central High School, fourteen year old Jo Ann Allen was one of twelve African-American students who broke the color barrier and integrated Clinton High School in Tennessee. At first things went smoothly for the Clinton 12, but then outside agitators interfered, pitting the townspeople against one another. Uneasiness turned into anger, and even the Clinton Twelve themselves wondered if the easier thing to do would be to go back to their old school. Jo Ann--clear-eyed, practical, tolerant, and popular among both black and white students---found herself called on as the spokesperson of the group. But what about just being a regular teen? This is the heartbreaking and relatable story of her four months thrust into the national spotlight and as a trailblazer in history. Based on original research and interviews and featuring backmatter with archival materials and notes from the authors on the co-writing process.


Praise For This Promise of Change: One Girl’s Story in the Fight for School Equality…

“Readers will empathize with Jo Ann's honest incredulity . . . Such gems relevant to today's politics, along with the narrator's strong inner voice, make this offering stand out. Powerful storytelling of a not-so-distant past.” —Kirkus Reviews, starred review

"Insightful, immediate, and passionate . . . Lyrical yet hard-hitting account of a pivotal chapter in the history of desegregation." - Publishers Weekly, starred review

"This evocatively told, carefully researched memoir-in-verse . . . adeptly shows readers that, like the Clinton Twelve, they too can be part of something greater than themselves." - School Library Journal, starred review

"This moving and timely memoir should have a place in all libraries that serve young adults." - School Library Connection, starred review

"Sure to mobilize youth to action and change, this book is necessary for all library collections that serve youth." - VOYA, starred review

“Accessible text and fast-paced narration make this a strong recommendation for 'One School, One Book' middle-school reading.” —BCCB

“[A] fine addition to texts about the integration of public schools during the civil rights era in the United States. . .” —The Horn Book Magazine

Debbie Levy is the New York Times bestselling author of many books, including I Dissent; The Year of Goodbyes: A True Story of Friendship, Family, and Farewells; and Imperfect Spiral. She lives in the Chesapeake Bay area.


Jo Ann Allen Boyce was one of twelve students to desegragate Clinton High School in 1956. She has worked as a professional singer and a nurse. She lives in Los Angeles.