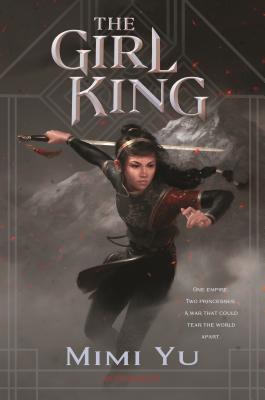 Two sisters become unwitting rivals in a war to claim the title of Emperor in this richly imagined, Asian-inspired fantasy for fans of Renée Ahdieh and Sabaa Tahir.

Sisters Lu and Min have always known their places as the princesses of the Empire of the First Flame: assertive Lu will be named her father's heir and become the dynasty's first female ruler, while timid Min will lead a quiet life in Lu's shadow. Until their father names their male cousin Set his heir instead, sending ripples through the realm and throwing both girls' lives into utter chaos.

Determined to reclaim her birthright, Lu has no choice but to go on the run, leaving Min to face the volatile court alone. Lu soon crosses paths with Nokhai, the lone, unlikely survivor of the Ashina, a clan of nomadic wolf shapeshifters. Nok never learned to shift--or to trust the empire that killed his family--but working with the princess might be the only way to unlock his true power.

As Lu and Nok form a shaky alliance, Min's own hidden power awakens, a forbidden, deadly magic that could secure Set's reign . . . or allow her to claim the throne herself. But there can only be one emperor, and the sisters' greatest enemy could very well turn out to be each other.

This sweeping fantasy set against a world of buried ancient magic and political intrigue weaves an unforgettable story of ambition, betrayal, and sacrifice.

“[A] masterful blend of Asian history with a touch of fantasy. . . . Yu crafts a rich tale filled with detailed world-building that draws readers in. This mainly female-led ambitious adventure will appeal to fans of Graceling by Kristin Cashore and The Star-Touched Queen by Roshani Chokshi.” —School Library Journal, starred review

“[W]ith its Asia-inspired worldbuilding, lush descriptions, and a weighty sense of history, this sprawling fantasy is . . . a strong debut.” —Publishers Weekly

“An absolutely fantastic tale of legends, magic and destiny, The Girl King kept the pages turning. The myths are awesome, the heroes are unsinkable, and the antagonists are chock-full of twisted agendas. If you're down with dangerous magic, clans of shapeshifters, and worthy girls who somehow STILL need to prove their worth, then you will love this as much as I did.” —Kendare Blake, #1 New York Times bestselling author of the Three Dark Crowns series

“The Girl King is an intricate, richly crafted fantasy that will draw you in and keep you guessing to the last stunning battle.” —Heidi Heilig, author of THE GIRL FROM EVERYWHERE and THE SHIP BEYOND TIME

“Fierce and unforgettable, The Girl King is an epic fantasy of tremendous lyrical power; that rare novel that leaves you breathless, as though your dreams and heart are bigger than your body. There's no greater pleasure than to find a novel that makes you feel more alive--Mimi Yu has that gift of magic.” —Marjorie Liu, New York Times bestselling author and Hugo Award winner for MONSTRESS

“The Girl King is a delight! Yu draws the reader in to a new and intriguing fantasy world with fascinating characters and deft storytelling. I want the next installment!” —Cindy Pon, author of WANT and SERPENTINE

“Everything I want in a high fantasy. Yu draws fluently from history to create an exquisite world, brings it to life with gorgeous and atmospheric prose, and populates it with fascinating characters. . . I can't wait to see what this very talented author does next.” —Samantha Shannon, New York Times bestselling author of THE BONE SEASON