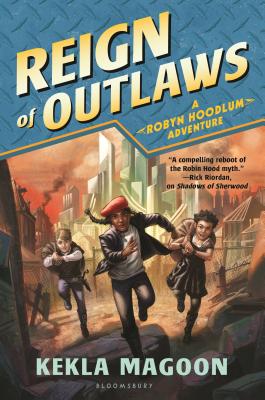 “A neatly packaged conclusion to this modern and youthful take on the famous Robin Hood legend.” —Kirkus Reviews

“Magoon stays true to form here with immersive writing and the development of her futuristic, dystopian Sherwood; fans of the first two books will enjoy some neat and satisfying answers as this exciting reinvention of a classic legend comes to a close.” —The Horn Book Magazine

“A compelling reboot of the Robin Hood myth.” —Rick Riordan, bestselling author of PERCY JACKSON & THE OLYMPIANS on SHADOWS OF SHERWOOD

“Thrilling. . . . This exciting page-turner will undoubtedly be a hit.” —starred review, School Library Journal on SHADOWS OF SHERWOOD

“The episodic quests call to mind the Percy Jackson adventures and will inspire a new generation to connect with Robin Hood's timeless tale.” —Booklist on SHADOWS OF SHERWOOD

“This colorful adventure does not easily fit into a genre box, as it combines futuristic elements with fantasy and folklore. . . . The adventure and cliffhanging ending will entice readers.” —Kirkus Reviews on SHADOWS OF SHERWOOD

“Magoon cleverly weaves elements of the Robin Hood tale into this futuristic story about social justice, friendship, and identity. The wily kid heroes and thrilling adventures will appeal to young readers.” —Horn Book Magazine on SHADOWS OF SHERWOOD

“A satisfying and nuanced follow-up to this hit series. Readers will anxiously anticipate the next installment.” —starred review, School Library Journal on REBELLION OF THIEVES