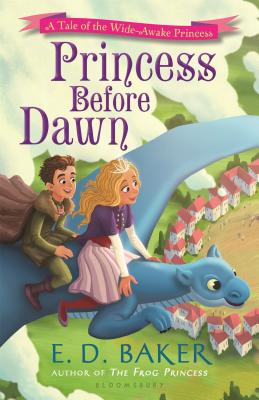 Princess Before Dawn (The Wide-Awake Princess)

Princess Annie's beloved kingdom is threatened to be overtaken in the seventh book in the Wide-Awake Princess series.

Annie's beloved home Treecrest has become a favorite destination for all sorts of magical beings. One new set of guests are particularly strange, and they are ready to take over a new hunting ground. Annie and Liam turn to their only friends who can help, Francis and Zoe. But when Francis and Zoe arrive in Treecrest, the new hunting group is having too much fun to pack up and go home and nothing Francis or Zoe say seems to help.

Can Annie, Liam and their new friends figure out a way to reclaim Treecrest before it's overrun with hunters? Or will Annie lose her one true home?


Don't miss the rest of the Wide-Awake Princess series by E. D. Baker:

And these other magical series:


Praise For Princess Before Dawn (The Wide-Awake Princess)…

“Romantic, suspenseful, and charming, it's no wonder this series has so many fans.” —Storytime Hooligans on THE BRAVEST PRINCESS

“For parents who are hesitant about princess books, here's one that will introduce nuance and character to what is so often a disappointing genre.” —Common Sense Media on THE BRAVEST PRINCESS

“Annie is an enjoyable, independent, and undaunted character, who uses wits and skills rather than spells in her endeavors.” —Booklist on THE WIDE-AWAKE PRINCESS

“Humorous. . . . This fractured fairy tale will be enjoyed by readers who like adventure with a touch of romance.” —School Library Journal on THE WIDE-AWAKE PRINCESS

“Readers will delight in the twists the author makes to the familiar tales, seamlessly weaving them into the plot.” —Kirkus Reviews on UNLOCKING THE SPELL

“A good example of a quest for girls who are seeking something light and fun.” —Library Media Connection on UNLOCKING THE SPELL