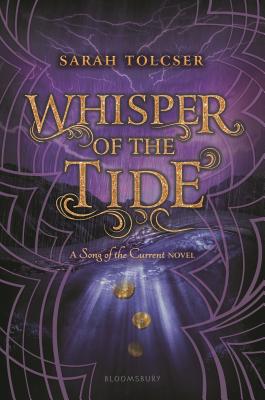 Whisper of the Tide

The next book in the immersive fantasy Song of the Current series, set along the waterways of a magical world, perfect for fans of Sabaa Tahir and Victoria Aveyard.

Just as there's a god at the bottom of the river, there is a god who lies under the ocean. And she had other plans for me.

Caro Oresteia spent her life waiting to be called by the river god, as those in her family had been for generations. But when she's swept away on an adventure to save the Akhaian royal prince, Markos, her destiny is sealed by the sea god instead.

For now, Caro is landlocked, helping Markos reclaim his throne after nearly his entire family was assassinated in a political coup. Without any financial or military support, Markos is desperate for allies, and Caro has fought off more than one attempt on his life. When a powerful Archon offers his army in exchange for Markos's marriage to his daughter, Caro must choose: her love for Markos, or the fate of Akhaia? And more important: how much is she willing to risk to defy the sea god's wishes and chart her own course?


Praise For Whisper of the Tide…

“Caro's adventures and struggles to change her fate will leave readers on the edges of their seats. . . . A thrilling sequel.” —Kirkus Reviews

“Shipwrecks, sea chases, political intrigue, assassins, and treasure hunts are all part of the mix in this deftly paced sequel to Song of the Current. Focused on adventure, this has just enough romance to appeal to a wide range of tastes.” —Booklist

“Tolcser deftly weaves together romance, family, and politics, with a swashbuckling adventure full of twists and turns, narrated in Caro's distinctive and forceful voice.” —BCCB

“Adventurous and dangerous! Fate and fires, pirates and shadowmen, Song of the Current will carry you into a treacherous and fantastic world, which you will not want to leave.” —Stephanie Garber, New York Times bestselling author of CARAVAL on SONG OF THE CURRENT

“This enticingly written tale will take readers on an adventure and leave them craving more. For fans of titles such as Heidi Heilig's The Girl from Everywhere or Susan Dennard's Truthwitch. Highly recommended for all YA collections.” —School Library Journal, starred review, on SONG OF THE CURRENT

“Caro's description of her boat home, the Cormorant, will make even readers unfamiliar with sailing feel as though they belong on the water with her. Tolcser blends the right amount of epic fantasy, sea voyage, and romance for a rollicking, swashbuckling adventure.” —Kirkus Reviews, starred review, on SONG OF THE CURRENT

“A fantastical tale of survival and finding one's place in the world . . . perfect for fans of swashbuckling pirate tales and works by Victoria Aveyard and Leigh Bardugo.” —VOYA on SONG OF THE CURRENT

“First-time author Tolcser has created a hearty sea adventure, laced with romance and fantasy.” —Booklist on SONG OF THE CURRENT

Sarah Tolcser is the author of Song of the Current and lives in New Orleans, where she is an elementary technology teacher. A graduate of St. Lawrence University, she double majored in writing and philosophy. She enjoys video games and NBA basketball. She is married, with two cats.
www.sarahtolcser.com/blog
@SarahTolcser