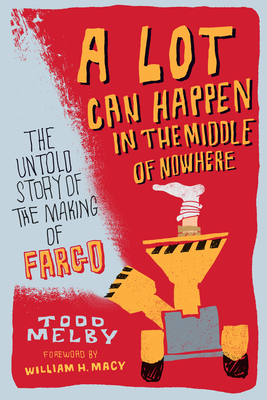 A Lot Can Happen in the Middle of Nowhere

The Untold Story of the Making of Fargo

Go behind the scenes of this classic nineties film from cinematic masters Joel and Ethan Coen. Yah, you betcha, you're gonna discover some fascinating tidbits to celebrate the film's twenty-fifth anniversary.

The 1996 movie Fargo stirred widespread curiosity about snowy winters, funny accents, and bloody mayhem on the frozen tundra of Minnesota and North Dakota. The film won two Academy Awards and inspired a popular, award-winning television series. It is also a quintessentially Minnesota film--or is it?

A Lot Can Happen in the Middle of Nowhere presents the untold stories behind the making of Joel and Ethan Coen's most memorable film. It explores the behind-the-scenes creative moments that made Fargo a critical and cultural success, including casting struggles, the battles over dialect, production challenges (a lack of snow), and insights from the screenplay and deleted scenes. Author Todd Melby examines to what extent the story was inspired by true events (as the film claims), and whether the Coens are trustworthy narrators of their own story. In addition to biographical details about the Coen Brothers, the book reveals what Fargo says about Minnesota and the Midwest.