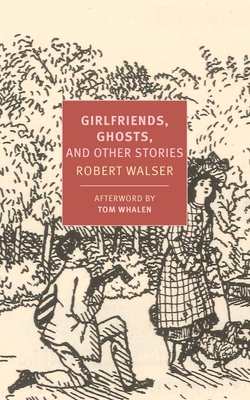 Girlfriends, Ghosts, and Other Stories

Girlfriends, Ghosts, and Other Stories brings together eighty-one brief texts spanning Robert Walser’s career, from pieces conceived amid his early triumphs to later works written at a psychiatric clinic in Bern. Many were published in the feuilleton sections of newspapers during Walser’s life; others were jotted down on slips of paper and all but forgotten. They are strung together like consciousness, idiosyncratic and vulnerable, genuine in their irony, wistful in their humor. Some dwell on childish or transient topics—carousels, the latest hairstyles, an ekphrasis of the illustrations in a picture book—others on the grand themes of nature, art, and love. But they remain conversational, almost lighter than air. Every emotion ventured takes on the weight of a sincerity that is imperiled as soon as it comes into contact with the outside world, which retains all of the novelty it had in childhood—and all of the danger.

Praise For Girlfriends, Ghosts, and Other Stories…

"The inimitable output of the belatedly canonized Swiss writer Walser proves to be a gift that keeps on giving…Confirmed Walser fanatics will find countless examples of his reliably strange wit and bracing sincerity...The beauty and melancholy of landscapes such as 'Autumn Afternoon' are accompanied by autobiographical, virtuosic critical pieces such as 'Walser on Walser' and 'Something On Writing' that show that there are still surprises to be had even this far into the writer’s seemingly bottomless catalogue.” —Publishers Weekly

"Considered by contemporaries to be an inspiration for Kafka and a kindred spirit, Walser is generally lighter and more playful and very attuned to detail.” —Kirkus Reviews

“Walser’s energy, curiosity and observational brilliance never flags, whether it concerns a morning walk, a playful kitten, a moment of transcendence on a terrace above the mist veiled lake of Biel, or a conversation with himself.” —Will Stone, TLS

“With the publication of Girlfriends, Ghosts, and Other Stories, we have one more opportunity to discover this extraordinary Swiss writer…With his intrusions into the text, Walser shows a delightful disregard for the established boundaries between reader and writer…The result is a literature that laughs at itself, an utterly original form of art.” —A.M. Kaempf, Los Angeles Review of Books

"The moral core of Walser's art is the refusal of power; of domination.... Walser's virtues are those of the most mature, most civilized art. He is a truly wonderful, heartbreaking writer." —Susan Sontag

"If he had a hundred thousand readers, the world would be a better place." —Hermann Hesse

"A writer of considerable wit, talent and originality .... recognized by such impressive contemporaries as Kafka, Brod, Hesse and Musil .... [and] primarily known to German literary scholars and to English readers lucky enough to have discovered [his work] .... [Walser's tales] are to be read slowly and savored .... [and] are filled with lovely and disturbing moments that will stay with the reader for some time to come." —Ronald De Feo, The New York Times

Robert Walser (1878–1956) was born into a German-speaking family in Biel, Switzerland. He led a wandering, precarious existence while writing his poems, novels, and vast numbers of the “prose pieces” that became his hallmark. NYRB Classics also publishes Walser’s Jakob von Gunten , Berlin Stories and A Schoolboy’s Diary and Other Stories.

Tom Whalen is a novelist, short-story writer, poet, critic, and the co-editor of the Robert Walser issue of the Review of Contemporary Fiction.

Nicole Köngeter is a freelance translator and teacher of English and German in southwest Germany.

Annette Wiesner’s translations of Robert Walser have appeared in Connecticut Review, Kestrel, and Witness.
Loading...
or
Not Currently Available for Direct Purchase